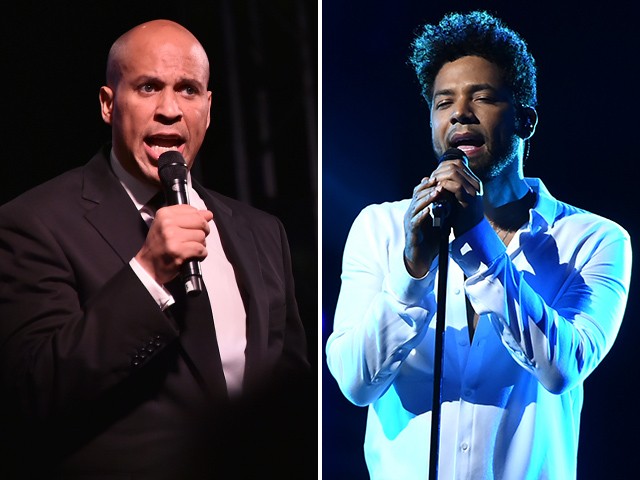 Newly-announced presidential candidate Sen. Cory Booker (D-NJ) called on the House of Representatives this week to pass legislation that would designate lynching a federal hate crime — re-upping the bill, which passed the Senate in December, in response to an alleged attack on Empire actor Jussie Smollett.

Smollett, who is famous for playing a gay character on the popular Fox television program, alleges two men beat him as they near his Chicago apartment complex. Smollett claims the attackers yelled, “Aren’t you that faggot ‘Empire’ n***r?” at him, while his manager, Brandon Moore, told the police that he heard them tell the actor, “This is MAGA country.”

Smollett also told police the men placed a thin rope around his neck before fleeing the scene.

“The vicious attack on actor Jussie Smollett was an attempted modern-day lynching. I’m glad he’s safe,” Booker tweeted on Tuesday. “To those in Congress who don’t feel the urgency to pass our Anti-Lynching bill designating lynching as a federal hate crime– I urge you to pay attention.”

To those in Congress who don’t feel the urgency to pass our Anti-Lynching bill designating lynching as a federal hate crime– I urge you to pay attention. https://t.co/EwXFxl5f2m

The bill — Justice for Victims of Lynching Act of 2018 — was originally introduced in June by Booker, Kamala Harris (D-CA), and Tim Scott (R-SC). The bill passed the Senate Judiciary Committee in October and passed through the Senate by unanimous consent on December 19.

“Today is an emotional and historic day,” Booker said after the bill’s passage. “For over a century, members of Congress have attempted to pass some version of a bill that would recognize lynching for what it is: a bias-motivated act of terror. And for more than a century, and more than 200 attempts, this body has failed. Today, we have righted that wrong and taken corrective action that recognizes this stain on our country’s history.”

The National Association for the Advancement of Colored People (NAACP), the Anti-Defamation League, and the Equal Justice Initiative have championed the bill.