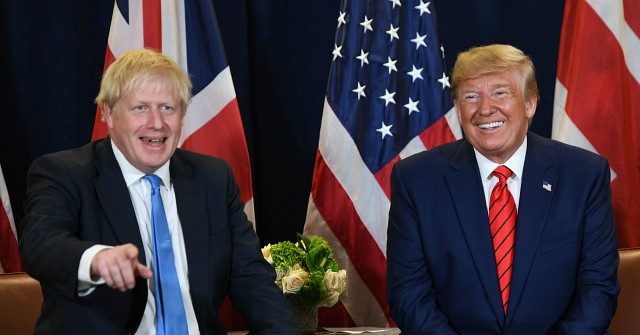 British Prime Minister Boris Johnson — who tested positive for coronavirus in March and was subsequently hospitalised with the virus — extended his well wishes to President Trump Friday morning.

Donald Trump revealed that he and the First Lady had tested positive for the Chinese virus in the early hours of Friday morning, and that they were going into quarantine together. Melania Trump subsequently confirmed the pair were “feeling good”, and the President’s physician said he expected the President to continue his duties “without disruption”, although in-person events like rallies were cancelled as of Friday.

World leaders have expressed their good wishes for President Trump since the news broke, among them Britain’s Prime Minister Boris Johnson, who wrote: “My best wishes to President Trump and the First Lady. Hope they both have a speedy recovery from coronavirus.”

Unlike many of those leaders, however, Johnson has first-hand experience with coronavirus. The PM went into self-isolation on March 27th after he developed what was then described as mild symptoms, and tested positive for the virus.

Johnson’s condition worsened, however — a development subsequently linked to his being overweight — and he was admitted to hospital in early April, before being transferred to intensive care within 24 hours. First Secretary of State Dominic Raab assumed the role of acting leading of government while the Prime Minister was indisposed.

While the fact the sitting Prime Minister of the United Kingdom had been taken into an intensive care ward with coronavirus made global headlines, government spokesmen said Johnson was “sitting up in bed” and breathing unaided in a stable condition. Downing Street said the Prime Minister didn’t receive a ventilator respiratory support at any stage and responded to a “standard oxygen treatment”.

Mr Johnson was released from hospital exactly one week after he was first admitted, five days after his move to intensive care. Rather than moving to Downing Street, the usual London base of the Prime Minister, he instead went to Chequers — his official country residence — to convalesce.

President Trump praised the “incredible” energy of PM Johnson after his hospital discharge and return to work after just a fortnight of recovery. As Breitbart London reported on April 24th:

Revealing that when he picked up the phone to Mr Johnson he expected him to sound exhausted, instead “he was ready to go”. President Trump said Mr Johnson was like “the old Boris”, with “tremendous energy and tremendous drive.”

He continued: “I was very surprised, because he called me pretty close to when he got out of the hospital. I think he’s doing great. He was so sharp and energetic. Pretty incredible. He’s an incredible guy. He’s a friend of ours and a friend of mines…they’re lucky to have him over there.”