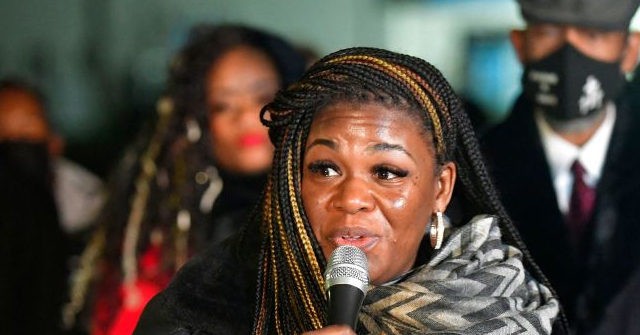 Rep. Cori Bush (D-MO) said she would not stop using the “defund the police” slogan, despite the movement’s growing unpopularity and other Democrat members pleading with her to stop using the term while spending tens of thousands of dollars on private security.

Bush told Axios that she does not want to stop using the slogan, even as the midterm elections are getting closer with the first primary elections in Texas less than a month away. Her colleagues in the past have tried to convince her to stop with the far-left rhetoric and have even blamed the slogan for their significant losses in 2020.

The congresswoman said she “absolutely” feels the pressure from her Democrat colleagues to change her rhetoric, adding, “I’ve had colleagues walk up to me” to say that the “defund the police” slogan does not help in their perspective districts.

However, Bush said she would blame her party’s inability to pass crucial pieces of legislation, not the “defund the police” slogan if the Democrats lose their very slim House majority later this year.

“I always tell [fellow Democrats], ‘If you all had fixed this before I got here, I wouldn’t have to say these things,’” Bush said, talking about the Democrats needing to change the way they discuss shifting money from law enforcement other services.

Breitbart News’s Katherine Hamilton previously broke down how the “defund the police” movement had become widely unpopular and Bush’s past rhetoric:

The “Defund the Police” movement turned out to be wildly unpopular with voters of all stripes apart from far-left, self-described “progressives.” Democrat politicians and corporate media have begun denouncing the movement as fallout from defunding, anti-police rhetoric, and subsequent staffing shortages become more apparent to voters. A December poll found that a majority (61 percent) of Americans disapprove of Biden’s handling of crime nationwide, with only 36 percent approving of his ability to manage crime.

Bush’s call to defund the police also comes as big cities across the country grapple with rising violent crime and murders. Many of the Democrat-run cities dealing with rising crime defunded their police departments following the death of George Floyd and the costly Black Lives Matter riots — a destruction which Bush vocally supported.

It was also reported that Bush used roughly $200,000 from her campaign throughout 2021 to pay for security, and ultimately was the biggest spender from the so-called “squad”:

Last year, during a live CBS News interview, she said, “defunding the police has to happen,” but when confronted about hiring private security, she replied: “You would rather me die? Is that what you want to see? You want to see me die?”

The National Republican Congressional Committee (NRCC) stated that the committee would continue to promote would the Democrats are saying about defunding the police so voters can know the truth.

“The NRCC will also keep talking about how Democrats want to defund the police ahead of the midterms. Voters deserve to know the truth about Democrats’ pro-crime agenda,” NRCC Spokesman Mike Berg said in a statement.