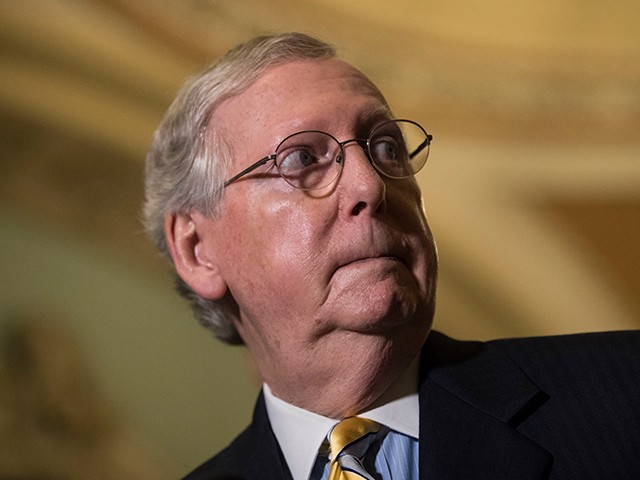 More than 100 conservative leaders have signed on to a letter delivered to Senate Majority Leader Mitch McConnell (R-K) urging him to use the remaining days of the 115th Congress to confirm President Donald Trump’s more than 200 executive and judicial nominees.

Following the retention of a Republican majority in the Senate in the 2018 midterm elections, the Conservative Action Project (CAP) launched the letter campaign and said lawmakers should work “around the clock” if necessary to put Trump’s picks in the executive branch and federal courts into place.

“If these nominations are not confirmed by the end of the year, they will be returned to the White House,” the letter said.

“With this in mind, we ask you to keep the Senate in session to confirm all pending conservative executive and judicial nominations before adjourning for the year — around the clock, including nights and weekends if necessary,” the letter said. “Particularly now that the 60-vote threshold is no longer a barrier, there is no excuse for not continuously confirming nominees.”

The letter said the judicial nominees are “critical for the integrity of the judiciary, but also critical to ensuring that executive branch agencies are fully implementing President Trump’s agenda.”

“From the courts to the agencies, President Trump needs nominees committed to his stated policy goals,” the letter said.

The letter slams the Senate for its two and a half days a week work schedule and called on it to halt Democrats’ efforts to obstruct Trump’s nominations.

“The role of advise and consent is among the Senate’s chief duties,” the letter said. “For this reason, we ask the Senate to work around the clock to confirm conservative nominees before leaving in December.”

The letter also notes that this is is not the first time conservatives have lobbied McConnell to get Trump’s nominees approved. A letter was sent last year requesting the same from McConnell.

A U.S. president is only one human being, so he cannot actually implement the agenda that the American people elected him to enact unless he has thousands of political appointees leading and managing all of the departments, agencies, divisions, and offices in the U.S. government to carry out his orders and supervise the 2.5 million people who work in his administration. Per Article II of the U.S. Constitution, more than 1,200 of the most senior of these positions can only be nominated by the president and then must be confirmed by the Senate.

Regarding federal courts, the Constitution further specifies that every single federal judge — from the Supreme Court to 13 courts of appeals to 94 district trial courts — must likewise be nominated by the president and confirmed by the Senate. Without Senate confirmation, the entire third branch of the federal government is hamstrung, unable to uphold the rule of law for millions of Americans.

Meese served as founding chairman of CAP when it was established in 2008.

“The vision of CAP was eloquently communicated in the Mount Vernon Statement which was released in 2010 and reads, in part:

At this critical time, we need a restatement of Constitutional conservatism grounded in the priceless principle of ordered liberty articulated in the Declaration of Independence and the Constitution.