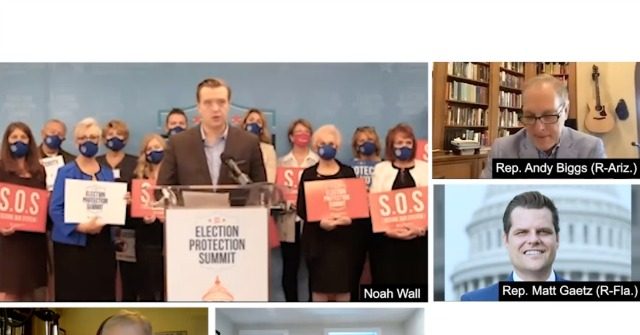 Freedom Works held a press conference with lawmakers and election and Constitutional experts on Monday to call on the Senate to push forward with the confirmation hearings for Supreme Court nominee Amy Coney Barrett despite the Democrats calling for a delay because members of the Senate Judiciary Committee have been diagnosed with the coronavirus.

Breitbart News asked about how the Democrats can legitimately call for delays when Congress has been holding other virtual hearings — and even remote voting — since the onset of the virus pandemic.

“We been holding hearings in both bodies — they allow proxy voting for Pete’s sake, in the United States House of Representatives,” Rep. Andy Biggs (R-AZ), said at the virtual press conference. “We’ve all seemed to master somewhat the art of technological hearings and video conferencing.”

“The move to delay this obviously is political in nature,” Biggs said.

Biggs said that even if some rule changes were needed when it comes to the floor vote on Barrett’s confirmation, Senate Republicans have the votes to do that.

“I encourage them to move forward, to get this hearing done, even if you have to go by video conferencing,” Biggs said.

“It’s very clear that the Democrats’ position is whatever benefits them politically at the given time,” Noah Wall, executive of Freedom Works, told Breitbart News.

Cleta Mitchell, a partner and political law attorney at Foley & Lardner LLP and a political activist, told Breitbart News that Democrats use the virus as a reason to do or not to do things depending on their agenda.

“I think that’s one of the most important thing is to realize that the left is using Covid as the reason to do things or as the reason not to do things, depending on whatever outcome is that they want — they say, ‘And we have to do it this way because of Covid,” Mitchell said.

Mitchell said she thinks Americans will see through this tactic.