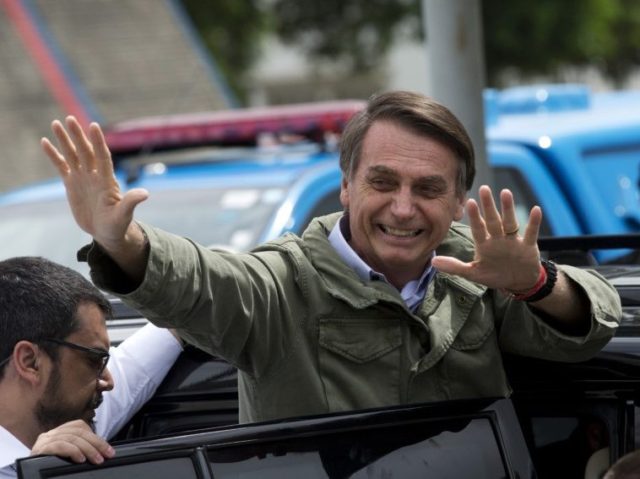 Bolsonaro won the first round of voting in early October, but not by more than the 50 percent needed to prevent a second round runoff against the runner-up. While his lead diminished somewhat in the past week, official vote tallies counting 98.5 percent of precincts confirm Bolsonaro winning with over 55 percent of the vote.

Bolsonaro became the frontrunner of the 2018 Brazilian presidential campaign after the arrest, conviction, and failed appeals of Luiz Inácio Lula da Silva, president of Brazil between 2003-2011. Lula, the head and founder of Haddad’s Workers’ Party (PT), was convicted of taking over $1 million in bribes from private contractors and using it to buy a luxury beachfront property. Despite losing all his appeals in January, rendering him unable to run for president, Lula refused to step out of the campaign until September, leaving Haddad less than a month to campaign.

Bolsonaro also lost significant campaigning time in September after a socialist sympathizer stabbed him during a rally in broad daylight, damaging his intestines and demanding major reconstructive surgery. His campaign relied on social media for much of the time he was in the hospital to maintain momentum. Opponents and antagonistic media accused Bolsonaro of inciting violence following the incident.

At press time, Bolsonaro received 55.34 percent of votes counted compared to 44.66 for Haddad, according to the government’s count. As Brazil has a compulsory voting system, voters who wished to support neither candidate cast blank ballots, of which there was 2.15 percent. Null ballots made up the remainder at 7.44 percent.

Bolsonaro will become Brazil’s 42nd president and its first conservative president in the post-military dictatorship era since Fernando Collor in 1989. Collor launched a widely unpopular presidential race against Bolsonaro in January before withdrawing from the election with little fanfare.

For much of the period between elections, Bolsonaro enjoyed a lead of up to 14 percent in polls against Haddad. That lead narrowed in the latest poll released before the election this week by the firm Datafolha, which found Bolsonaro with 56 percent support over Haddad’s 44 – nearly the identical tallies of the real election.

Bolsonaro made live remarks shortly after his confirmed win, reading segments from the Bible and putting a heavy emphasis on freedom and family values. “Freedom is a fundamental principle … freedom to come and go, political and religious freedom, freedom of opinion,” he said, calling his election a “celebration of freedom in Brazil.”

The president-elect went on to thank his supporters for their support and prayers, particularly in light of surviving an assassination attempt in September which required surgery and took him off of the campaign trail the month before the election. The man who stabbed him told police he was “sent by God” to kill the candidate and was later identified as a longtime prior member of a socialist party.

On Sunday morning, Bolsonaro posted a photo of himself wearing the shirt he was wearing when he was stabbed, reading “my party is Brazil.”

Bolsonaro campaigned against the widespread corruption of Haddad’s Workers’ Party (PT), which ruled Brazil for most of the 21st century. He promised a commitment to imprison and convict politicians found guilty of corruption as well as an emphasis on individual freedom, including gun rights; less government spending on gender and sexuality studies in school; fighting the influence of nefarious foreign entities in the country, particularly communist countries like China; and bringing Brazil closer to the West generally and the United States under President Donald Trump specifically.