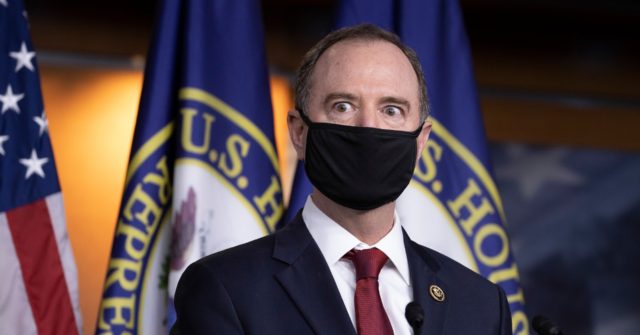 Rep. Lee Zeldin (R-NY) on Monday suggested Rep. Adam Schiff (D-CA) could be in jail for lying if he was not a member of Congress. Zeldin’s remark follows the House Intelligence Committee Chairman asserting — without evidence — the bombshell Hunter Biden reports are part of a Russia disinformation campaign.

“If you lie to Congress, you can go to jail for a long time. On the other hand, liars who are actually in Congress like Schiff instead get rewarded with increased power and title,” Zeldin said:

If you lie to Congress, you can go to jail for a long time. On the other hand, liars who are actually in Congress like Schiff instead get rewarded with increased power and title. https://t.co/Nsy9oIFTrF

During an appearance on CNN last week, Schiff told host Wolf Blitzer the recent Hunter Biden bombshell reports — which indicate that Joe Biden met with an adviser to the board of Burisma less than a year before he threatened to withhold aid from the country unless a Ukrainian prosecutor investigating the company was fired — are “from the Kremlin.”

“We know that this whole smear on Joe Biden comes from the Kremlin, that’s been clear for well over a year now that they’ve been pushing this false narrative about this vice president and his son,” Schiff said:

Rep. Adam Schiff says he’s concerned that he hasn’t “gotten much from the intelligence community” on Russia peddling disinformation.

“At times, some of the leadership, like Director Ratcliffe, not been very forthcoming in terms of the intelligence on the Russian threat.” pic.twitter.com/JhcVYlCgcf

The idea that the president, the White House counsel and others were made aware that Giuliani was being used by Russian intelligence and using Russian intelligence, in the sense of meeting with an agent of the Kremlin and pushing out this Kremlin narrative, the idea that they were knowing and still on the floor of the Senate during the impeachment trial pushing this Kremlin narrative is pretty breathtaking. But at this point we can’t be shocked anything this administration does, no matter how craven.

As the New York Post reported, the damning emails were derived from a laptop, which was dropped off at a Delaware repair shop in 2019 but never retrieved.

Director of Intelligence John Ratcliffe dismissed Schiff’s claims the bombshell reports are part of a broader Russian disinformation campaign during a Monday appearance on Fox Business Network’s Mornings with Maria.

“So Maria, it is funny that some of the people that complain the most about intelligence being politicized are the ones politicizing intelligence,” he said.

“We have shared no intelligence with Chairman Adam Schiff or any other member of Congress that Hunter Biden’s laptop is part of some Russian disinformation campaign,” Ratcliffe said.

The Trump campaign released an ad on Saturday blasting Biden for failing to be forthcoming on his son’s lucrative foreign business dealings, concluding that he “lied”: