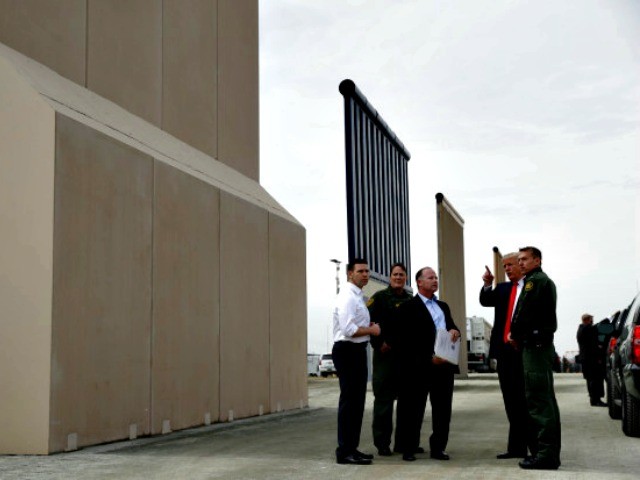 The Congressional Research Service (CRS) says President Trump has the legal authority to build significant portions of a border wall without additional congressional authorization or declaring a national emergency.

That conclusion was reached in a report released by the nonpartisan federal agency on January 10. A Department of Defense official made a similar legal argument in testimony before the House Armed Services Committee on Tuesday.

Until the CRS report was released, most of the national discussion surrounding President Trump’s authority to build the wall on the southern border – which he promised in his successful 2016 presidential campaign – focused on only two legal options: (1) his current request for Congress to appropriate $5.7 billion in the current fiscal year to build the wall, or (2) the possibility that he could invoke his authority under the National Emergencies Act, enacted in 1976, to build the wall.

The refusal of Congress to appropriate the $5.7 billion for the border wall prompted the partial federal government shutdown that began on December 22 and ended on January 25, when the president agreed to reopen the government for a brief three week period to allow congressional negotiators to hammer out a deal. Almost one week into that period of negotiation, it remains unclear if a deal will be struck. The president himself placed the oddds of success at “less than 50-50.”

As for the declaration of a national emergency to construct the wall, while many legal scholars agree that the president has the legal authority to do so, the expectation is that any such declaration would be immediately met with a legal challenge, possibly to be filed in the very liberal Ninth Circuit, where a judge would likely halt any construction of a border wall, possibly until the case made its way to the Supreme Court.

“The circumstances in which the Section 2808 authority [of Title 10 of the U.S. Code that codifies the National Emergencies Act] could be used to deploy fencing along the border appears to be a question of first impression, and one that is likely to be vigorously litigated,” the CRS report noted.

The report cited two sections of Title 10 of the U.S. Code: Section 2803 and Section 284, which are are separate and distinct from Section 2808, the section of Title 10 that grants presidential authority under the National Emergencies Act.

Section 2803, “provides that the Secretary of Defense ‘may carry out a military construction project not otherwise authorized by law’ upon determining that (1) ‘the project is vital to the national security or to the protection of health, safety, or the quality of the environment,’ and (2) ‘the requirement for the project is so urgent that’ deferring the project ‘would be inconsistent with national security or the protection of health, safety, or environmental quality.’ ”

Section 284, “provides that the Secretary of Defense ‘may provide support for the counterdrug activities or activities to counter transnational organized crime’ of any law enforcement agency, including through the ‘[c]onstruction of roads and fences and installation of lighting to block drug smuggling corridors across international boundaries of the United States.’

The caveat related to Section 284 is that the Department of Defense’s “authority to construct fences appears to extend only to ‘drug smuggling corridors,’ a condition that may limit where DOD could deploy fencing.”

The testimony of senior Department of Defense official John Rood before the House Armed Services Committee underscored the current “vital national security” need for a wall on the southern border, as Breitbart News reported:

“Current information shows that a caravan of over 12,000 people — there’s three that we are tracking, that the DHS is tracking en route, one that is over 12,000 by the latest estimate,” said Rood, who is the under secretary of Defense for policy.

Rood said there are currently more than 2,300 active duty troops at the southern border, down from a high of 5,900 in November.

But he says several thousands more active duty troops are expected to head to the border in the coming weeks, to assist the Department of Homeland Security with laying down more concertina wire, and helping to monitor the border between points of entry.

When questioned by Rep. Mo Brooks (R-AL) at that hearing, Rood cited the Section 284 authority mentioned in the CRS report, as Breitbart News reported:

BROOKS: If President Trump were to direct the Pentagon and the United States Military pursuant to 10 U.S.C § 284 to build such barriers as are necessary to secure our southern border from drug trafficking and international crime cartels would the United States military obey that order?

ROOD: If we judge it to be a lawful order, yes sir. And I assume it would be.

While any border wall construction begun under the authority of Section 2803 or Section 284 would also be subject to a legal challenge, the CRS report suggests that the ability of such challenges to impede construction is uncertain.