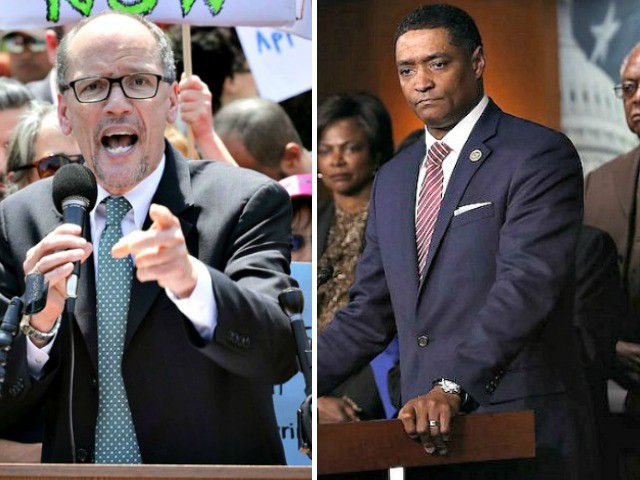 Caucus members told Politico that Rep. Bennie Thompson (D-MS) introduced the debate over the DNC’s controversial superdelegate system and eventually led to the motion passing against Perez. The mood inside the room is said to have been “heated” as the vote was argued. Members “felt that the DNC pitted them against their constituents,” according to Congressional Black Caucus chairman Cedric Richmond (D-LA)

The superdelegate issue was a flashpoint during the 2016 Democrat primary, where critics argued the system afforded advantages to establishment candidates, such ex-Secretary of State Hillary Clinton or her insurgent rival sen. Bernie Sanders (I-VT) for the nomination process.

“An overwhelming majority of DNC members approved these historic reforms to strengthen and grow our party, increase transparency, and put our nominee in the best possible position to win in 2020,” DNC spokeswoman Adrienne Watson said. “As last Tuesday showed, when we empower our grassroots we succeed. We look forward to continuing our work with the caucus to build a strong and diverse party.”

When all is said and done from last Tuesday’s midterms–there are still nine outstanding House races–Democrats could have a majority as high as 236 seats but definitely will have at least 227. That final number is going to be critical for Democrats’ hopes of securing Pelosi as speaker, as every number extra that Democrats add to the final total is an extra vote Pelosi can afford to lose.

If Republicans sweep those nine remaining races, a very unlikely outcome, and Democrats enter the new Congress with 227 votes, Pelosi can only afford to lose nine Democrats on the floor. Democrats, however, are very likely to pick up a number of the nine outstanding seats. They currently lead Republicans in four of them:  California’s 10th District, New Jersey’s 3rd District, New York’s 22nd, and Utah’s 4th District. Republicans lead Democrats in the other five: California’s 39th and 45th Districts, and Georgia’s 7th, as well as Maine’s 2nd, and Texas’s 23rd Districts.

[D]espite Pelosi’s allies pushing the narrative that a challenger to her must emerge, that is not true. They can vote her down, and then most certainly after she would have failed to reach 218 votes on the first ballot on the House floor, then plausible challengers would emerge.

Not only does Pelosi face a tough battle to win over a weary colleague, but a recent poll shows the 78-year-old is losing support among voters. According to Gallup, 56 percent of Democrats and independents who are liberal-minded want the longtime California Democrat to forgo the speakership she held between 2007 and 2011. The survey was conducted between October 15 and October 28.