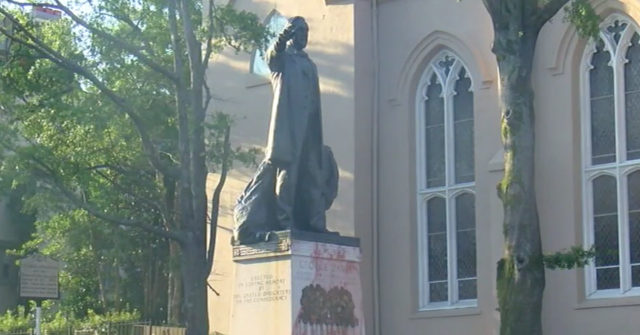 A woman was allegedly caught on camera defacing two Confederate monuments in North Carolina in the early hours of the Fourth of July, according to law enforcement.

In a statement on Thursday, the Wilmington Police Department said the suspect was spotted on surveillance video splashing orange paint on the pair of statues at around 3:00 a.m. local time near the corner of 3rd and Market and 3rd and Dock Streets.

The first monument vandalized was of George Davis, who served as the attorney general for the Confederacy. ABC 11 reported the statue was erected in 1911. The other statue, put up in 1924, depicts Gabriel James Boney and is dedicated to Confederate soldiers.

In 2017, the Tar Heel State’s Democrat governor, Roy Cooper, urged the removal of Confederate statues from public property in the wake of the deadly Charlottesville protests. However, as the Hill noted, a “2015 state law bars the removal of the monuments without legislative approval, however, several Civil War-era monuments have been vandalized in the state since.”

A statue honoring Confederate soldiers at Maplewood Cemetery in Durham, North Carolina, was vandalized in April with what is believed to have been cement.

A Confederate memorial in Salisbury, North Carolina, was vandalized overnight in August 2018.