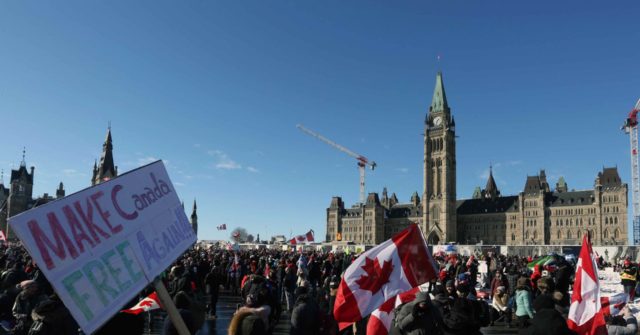 Participants in the Canadian trucker convoy protest in the capital city of Ottawa against vaccine mandates are slamming Prime Minister Justin Trudeau after he claimed Monday that they were “racist” and that participants defaced war memorials.

Over the past week, hundreds of truckers drove across the country to converge on the capital to protest vaccine mandates for truckers crossing the U.S-Canada border. They were cheered along the way by supporters, and have protested peacefully.

Rebel News founder Ezra Levant addressed the crowd on Saturday: noting that it was both diverse and non-violent:

I was invited by the truckers to give a short speech. Here’s what I said: pic.twitter.com/ZYclZwDBtH

#HONK if you love Canada’s Sikh community who make up a solid portion of truckers in Canada!! #FreedomConvoy2020 pic.twitter.com/ivOKtivNIo

The protesters briefly decorated a statue to Terry Fox, a Canadian runner and cancer research activist, with flags and signs.

They later cleaned the statue, though media reports claimed they had vandalized it.

They also cleaned up the protest site:

Over the past few days, Canadians were shocked and, frankly, disgusted by the behavior displayed by some people protesting in our nation’s capital. I want to be very clear: we are not intimidated by those who hurl insults and abuse at small business workers and steal food from the homeless. We won’t give in to those who fly racist flags. We won’t cave to those who engage in vandalism or dishonor the memory of our veterans.

“Canadians were shocked and disgusted by some people protesting in our nation’s capital,” Prime Minister Justin Trudeau says. pic.twitter.com/cxt2P2krg4

Trudeau appeared to be echoing unverified claims on social media, including claims about the Terry Fox statue, and a claim that truckers had parked their cars on a war memorial.

If Indigenous people did this we’d NEVER hear the end of it. Earlier today, the white protesters taking part in the trucker protest in Ottawa parked their vehicles on the cenotaph at the National War Memorial. And then later got drunk and stood on the Tomb of the Unknown Soldier. https://t.co/MpZylvpcmU pic.twitter.com/7f2Qn9iRck

Levant told Breitbart News that the two people who had parked on the monument moved their cars when told to do so. He added that the claim of stealing food from the homeless arose from an incident in which a protester had asked to be fed at a soup kitchen.

Trudeau also appeared to refer to claims that truckers flew swastika flags, including one flown from an expensive hotel at some distance from the protest:

The Chateau Laurier is Ottawa’s most expensive hotel. It’s also an establishment political hang-out — there are always cabinet ministers and lobbyists in the hotel bar. There is simply zero chance that a trucker would stay there. This is so obviously a false flag hoax. https://t.co/vGuSoUbVek

Levant said that one protester drew a swastika on a Canadian flag — not to endorse the swastika, but as a commentary on Trudeau’s “fascist” mandates, one with which Levant said he did not agree, but which was not intended as a racist statement.

Another man showed up wearing a Confederate flag, Levant said, but had his face covered and was told by others to leave.