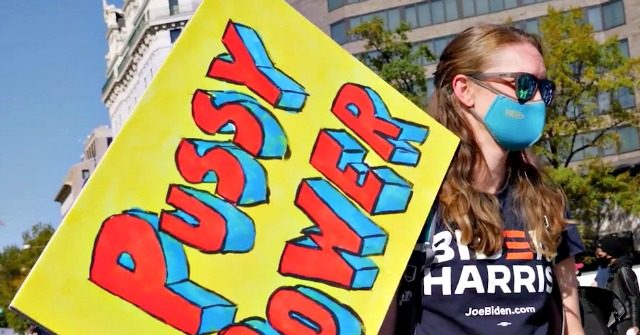 Participants brought signs with various sayings written on them such as “We Are Not Ovary-Acting” to the Women’s March in Washington, D.C., on Saturday.

One marcher wearing a Biden/Harris shirt held a sign that read “Pussy Power,” while another sign read “GOP Hates Democracy.”

Another participant held a sign reading, “If I wanted a Republican in my vagina, I’d sleep with one! Pro-Choice Pro-Freedom.”

In what appeared to be a reference to Judge Amy Coney Barrett’s Catholic faith, one marcher brought a sign with the words “Keep Your Rosaries Off My Ovaries” written on it.

However, Judge Barrett ruled against the tenets of her faith in the past when the law and the Constitution required, retired federal appellate judge Thomas Griffith told the Senate Judiciary Committee on Thursday.

“In Price versus City of Chicago, She ruled against pro-life litigants who challenged an ordinance that barred them from approaching women near abortion clinics for the purpose of leafleting, protesting, or counseling,” Griffith said.

“She displayed the same impartial approach in rulings that allowed the first federal executions in 17 years to proceed, regardless of her personal views on the death penalty,” he continued.