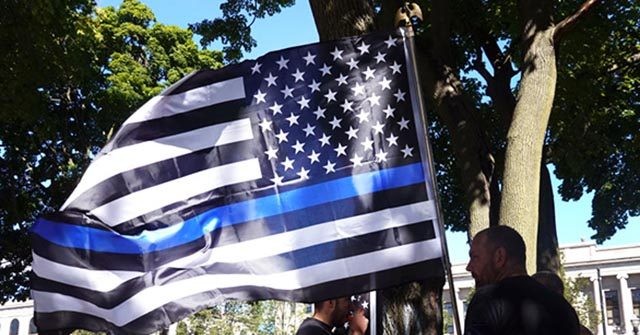 “Branded as a ‘Back The Blue First Responder Appreciation Event,’ it was organized in this [sic] summer in the wake of calls for police reform across the country as a way to show community support for first responders and law enforcement in the Effingham area,” the Effingham Daily News reported.

Originally planned as a rally, the gathering later turned into a neighborhood block party and fundraiser concert.

“The duo of country guitarists who performed as ‘Broken Roots’ on NBC’s America’s Got Talent provided entertainment. There were raffles for everything from a new 43 inch television to cutting boards with engraved police related imagery to a new pistol and holster,” the newspaper said.

Bruce Cox, who emceed the event alongside his daughter, told the outlet, “My grandfather was a deputy sheriff. My father was a firefighter. It’s been in my blood.”

“I’m into law and order. It just has to happen,” he continued, adding, “When everyone else is running out, they’re running in.”

Earlier this week, the main organizer told the Daily News they were trying to shed a positive light on law enforcement.

“They needed some recognition,” said Elizabeth Huston, a Republican running for the Effingham County Board.

One hundred and forty-nine people attended the event on Friday, according to its Facebook page.

The money raised will go to support programs such as Shop with a Cop, the Special Olympics, and K-9 Funds, Huston noted.

“First responders were at the event as well, though many in attendance were on actually [sic] duty, with police cars and ambulances idling at the edge of the parking lot,” the Daily News article said.

Effingham resident Marge Lancaster was eager to show her support for police officers in the area.

“I think the police do a wonderful job. They make me feel safe, since I live alone,” she commented.