A professor at Northwest Arkansas Community College said she was “raped through technology” after receiving the Presidential Emergency Alert.

Professor Dianne Phillips expressed her dismay in a tweet on Wednesday, stating her phone “was assaulted” and that she herself felt violated upon receiving the Presidential Emergency Alert through text message. 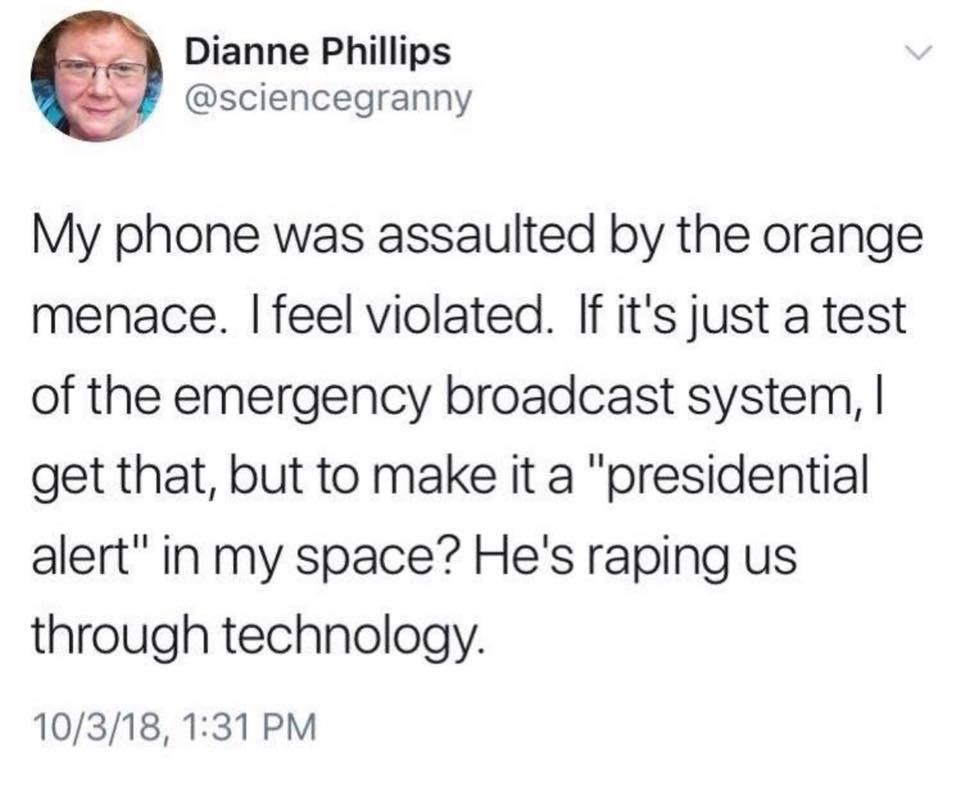 The tweet, which has since been deleted, was followed up with another tweet Thursday morning, in which Phillips claimed she had been “attacked by a troll algorithm” on Facebook.

I was attacked on facebook by a troll algorithm. At first it was funny, then it was challenging, with many of my family and friends feeling offended and concerned for my safety, and then it was incredibly fascinating from a forensic point of view. It was clearly mechanical.

Breitbart News contacted Professor Phillips to inquire as to whether or not she felt that society continuously using words like “rape” to describe events as mundane as receiving a message could eventually downplay its true definition.

The professor did not respond, but did, however, take to Twitter posting comments that seemed to be the answers to Breitbart’s queries. In her tweet, she doubles down that the presidential alert message could reasonably be called rape, based on the Latin root word as opposed to current day meaning of the word.

For the less educated… Latin ‘rapere’ to seize and take away by force, also ‘rape.’ My phone is my space. I dont answer unwanted calls. I block unwanted texts. I do not want alerts coming on my phone without my permission. It is a forcible entry into my space.

Professor Phillips has advanced degrees in Physics and Geology, and has been teaching at Northwest Arkansas Community College for 10 years, according to the college’s website.