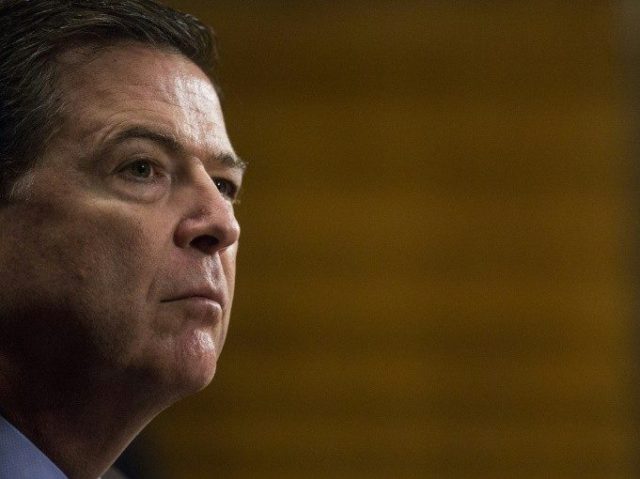 WASHINGTON, DC – Former FBI Director James Comey surrendered his attempts to block a subpoena to testify under oath before the U.S. House shortly after it became likely that a federal judge was going to humiliate him by rejecting his “brazen demand” because Supreme Court precedent makes clear that federal courts lack the authority to block such a subpoena from Congress.

The House Judiciary Committee has been asking for months for Comey to testify under oath. Lawmakers have serious questions regarding the FBI’s decisions regarding investigating Hillary Clinton and the campaign of President Donald Trump, including what Comey announced and did not announce, when he announced it, and why he attempted to usurp the role of the U.S. attorney general in deciding whether to charge Clinton with a crime.

After Comey refused to cooperate, Judiciary Committee Chairman Robert Goodlatte (R-VA) issued a subpoena requiring Comey to appear for a closed-door session under oath on Wednesday, December 5. The reason for a closed-door hearing is that lawmakers have only five minutes each in open hearings, during which time an experienced politician and lawyer like Comey can often wait out the clock for items they do not want to fully disclose. There are no time limits in a closed-door hearing, so each lawmaker or committee lawyer can keep drilling until he or she gets a full answer.

Republicans added that they would release the entire transcript of the hearing this week, so there was no good reason not to agree to the full-length questioning session.

Comey’s lawyers nonetheless filed a motion to quash – the technical term for a filing to get a court to block a subpoena – on Thursday in U.S. District Court for the District of Columbia.

Congress came back with massive firepower, as the U.S. House general counsel – former U.S. Deputy Solicitor General Thomas Hungar – responded to Comey’s filing. Hungar began by calling Comey’s motion a “brazen demand” that is “so extraordinary and frivolous that … no district court in the history of the Republic has ever granted [it].”

Hungar also made the point that the motion violated the Federal Rules of Civil Procedure, and thus was not actually even a legal case for the court to rule upon. He further argued that sovereign immunity protects Congress against such a lawsuit.

Even if none of that were true, the U.S. Supreme Court has made explicitly clear that the Constitution’s Speech or Debate Clause deprives federal courts of the power to intervene here. That provision, Article I, Section 6, Clause 1 of the Constitution, confers legislative immunity, which makes Congress immune from hostile actions from the executive branch or the courts with regards to any words uttered by lawmakers during congressional sessions, or congressional investigative activities.

In 1975, the Supreme Court held in Eastland v. U.S. Servicemen’s Fund that “the Speech or Debate Clause provides complete immunity … for the issuance of this subpoena.”

“Issuance of subpoenas … [is] a legitimate use by Congress of its power to investigate,” the Court explained. “The courts should not go beyond the narrow confines of determining that a committee’s inquiry may fairly be deemed within its province.”

The House Judiciary Committee has jurisdiction over all components of the U.S. Justice Department, including the FBI. With that minimal requirement satisfied, the Constitution does not permit any federal court to quash the Judiciary Committee’s subpoena.

Comey’s lawyers agreed over the weekend to dismiss the matter. Most media outlets have misreported the dismissal, saying that House Republicans and Comey have reached an “agreement” or a “deal” regarding Comey’s testimony.

Rather than an agreement or a deal, this was an unconditional surrender on the part of Comey, every bit as definite and complete as Japan’s surrender to the United States on the deck of the U.S.S. Missouri in 1945 to end World War II.

Calling this a “deal” is like comparing it to negotiations between a grizzly bear and a peacock. (The part of the peacock is played here by Comey). The peacock either does what the bear (Tom Hungar) says or things do not end well for the peacock.

Hungar is one of the most accomplished Supreme Court litigators in the nation and talked up as a possible future U.S. solicitor general. With skills of Hungar’s magnitude representing the House and such clear Supreme Court precedents on this issue, it was impossible for Comey to beat Congress in court. Otherwise put, the peacock prudently decided not to blitz the grizzly.

That raises the question of why Comey would ever file such frivolous papers in court. It appears that perhaps he hoped to get a left-wing judge who might rule in his favor despite the Constitution being on Congress’s side, and hoping further that the House’s inevitable appeal would not be decided before Democrats took control of the House on January 3. House Democrats would surely drop their demand for Comey’s testimony by the close of business that very day.

Some liberal federal judges have acted in such unprecedented ways since President Trump’s election: from the travel ban litigation where the Supreme Court ruled 100 percent in the president’s favor (Trump v. Hawaii), to the current litigation involving the DACA amnesty program for illegal aliens, to the asylum/caravan litigation on the U.S.-Mexican border. Comey hoped to get such a judge.

Instead, this legal matter was assigned to a mainstream conservative federal trial judge in Washington, DC. Comey and his lawyers evidently concluded that they had zero chance of getting that judge to ignore binding Supreme Court precedent, and agreed to immediately dismiss the suit.

Comey will testify in closed session before the Judiciary Committee on Wednesday. Republicans will release the transcript later this week, as they had always planned to do.

The matter is In re Subpoena of James Comey, No. 1:18-mc-174 in the U.S. District Court for the District of Columbia.