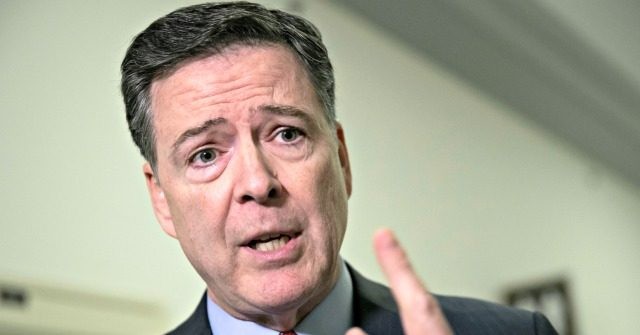 Former FBI Director James Comey wrote an op-ed on Tuesday denying the FBI ever spied on President Trump’s campaign in 2016 and claiming it was “just good people trying to figure out what was true, under unprecedented circumstances.”

But go ahead, investigate the investigators, if you must. When those investigations are over, they will find the work was done appropriately and focused only on discerning the truth of very serious allegations. There was no corruption. There was no treason. There was no attempted coup. Those are lies, and dumb lies at that. There were just good people trying to figure out what was true, under unprecedented circumstances.

The defense is coming, as Attorney General William Barr is reviewing the origins of the FBI’s investigation into the Trump campaign and ahead of a Justice Department inspector general report that is expected to be concluded next month into whether there was FBI bias in its investigation.

Barr has said he has found answers to his questions to be “inadequate,” leaving him with more questions. He has also said the answers do not “hang together.” He has appointed the U.S. Attorney of Connecticut John Durham, a prosecutor experienced with government corruption, to lead the investigation into the FBI.

In his op-ed, Comey called Trump a “liar” who is harming “vital institutions.”

“We must call out his lies that the FBI was corrupt and committed treason, that we spied on the Trump campaign, and tried to defeat Donald Trump. We must constantly return to the stubborn facts,” he wrote.

He claimed that the investigation was warranted after the FBI saw the first Russian attack on the Democratic National Committee’s servers starting in mid-June 2006, and an allied ambassador in late July told the FBI that months earlier, former Trump campaign adviser George Papadopoulos “knew about the Russian effort” to release dirt on Hillary Clinton in the form of emails as early as April 2016.

Comey did not mention in his op-ed that the “allied ambassador” — Australian diplomat Alexander Downer — has since said in interviews that Papadopoulos never mentioned “emails” to him and has also said there was no suggestion of any collusion between the Trump campaign and Russia. Specifically, Downer told Sky News there was “no suggestion that there was collusion between Donald Trump or Donald Trump’s campaign and the Russians.”

Nevertheless, Comey claimed in his op-ed that the information from Downer in late July led them to believe that the Trump campaign might be “conspiring” with Russians. He wrote:

But when we finally learned of it in late July, what should the FBI have done? Let it go? Go tell the Trump campaign? Tell the press? No. Investigate, to see what the facts were. We didn’t know what was true. Maybe there was nothing to it, or maybe Americans were actively conspiring with the Russians. To find out, the FBI would live up to its name and investigate.

Comey did not mention the many text messages Strzok exchanged with his lover and then-colleague,FBI lawyer Lisa Page, disparaging Trump and his supporters, or Strzok’s mention of an “insurance policy.”

Comey did not mention any evidence other than Papadopoulos’s meeting with Downer for supporting the idea there was collusion, although it is now publicly known that a lawyer for the DNC and the Clinton campaign hired Fusion GPS to conduct anti-Trump opposition research. Fusion GPS hired ex-British spy Christopher Steele, who produced a dossier claiming that the Trump campaign was colluding with Russia.

Comey wrote, again, without citing the dossier, that FBI investigators thought they had “probable cause” to get a surveillance warrant on former campaign adviser Carter Page — whom the dossier claimed was part of the collusion scheme.

“Page was no longer with the campaign, but there was reason to believe he was acting as an agent of the Russian government,” Comey wrote. He again asserted that if the FBI wanted to harm Trump, they would have leaked the investigation.

He then cited as evidence that he was not biased against Trump his decision to announce that he was reopening the email investigation into Clinton after investigators found her emails on Anthony Weiner’s laptop. However, he later wrote in a book that he assumed Clinton would win and did not want to undermine her election if it came out later that the investigation was reopened.

He wrote in his book: “Assuming, as nearly everyone did, that Hillary Clinton would be elected president of the United States in less than two weeks, what would happen to the FBI, the Justice Department or her own presidency if it later was revealed, after the fact, that she still was the subject of an FBI investigation?”

Comey also cited as evidence that the FBI was not biased against Trump former FBI Deputy Director Andrew McCabe’s leak in late October 2016 that the FBI was actively investigating the Clinton Foundation — which he said was “harmful to Clinton.” But a DOJ IG report later found that McCabe approved the leak to “rebut a narrative” that he was giving Clinton special treatment in light of a Clinton ally’s donation to his wife’s campaign.

Comey called media outlets who are reporting on potential FBI wrongdoing “fringe,” and claimed the FBI was just doing its job.