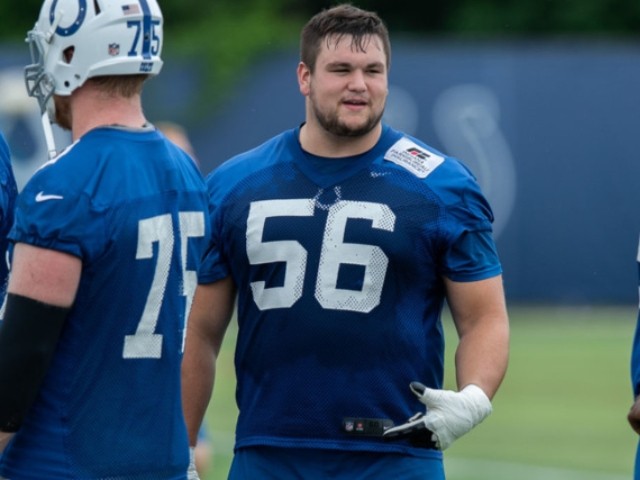 On November 12, the Indianapolis Colts posted a video on Twitter of rookie guard Quenton Nelson steamrolling a Jacksonville defender into the ground, and the highlight went viral.

The Colts posted the video to show what a great blocker Nelson is, but it ended up getting the 2018 first-round pick heavily penalized by the NFL.

On Friday, the NFL fined Nelson $26,739 for leading with his helmet as he drove Jaguars safety Barry Church to the ground, opening a big hole for running back Marlon Mack.

Nelson wasn’t penalized in the game for the hit, or in the days that followed.

But the popularity of the video brought so much attention to the play, the NFL took a second look at the block, realized Nelson led with this helmet, and dished out a fine.

Aside from the tenacity of the hit, something else that brought a lot of attention to the video was audio of Nelson letting out a primal screen as he leveled Church.

This made the block look even more tenacious, with the massive Notre Dame-product obliterating an opponent while yelling like the Incredible Hulk.

But there is only one problem — Nelson didn’t yell on the play. Somebody from the Colts’ social media department pumped in audio of him yelling on another play and dubbed it over Nelson’s pancake block on Church.

“I wasn’t yelling, not on that play,” Nelson said. “I don’t know how it got amped up like that.”

Nelson isn’t thrilled with the fine which he thinks is unjust and late.

ESPN’s Adam Schefter reported that Nelson will appeal the fine.

Surely Nelson can’t be thrilled with the individual, from his own organization, who superimposed that audio from another play, which helped make the video a sensation, but also brought extra scrutiny from NFL officials. The Colts removed the video from Twitter a few days after posting it.

So why was Nelson’s block illegal? In May, NFL owners approved a new rule it hopes will cut down on concussions.

It is a foul if a player lowers his head to initiate and make contact with his helmet against an opponent. Contact does not have to be to an opponent’s head or neck area – lowering the head and initiating contact to an opponent’s torso, hips, and lower body, is also a foul. Violations of the rule will be easier to see and officiate when they occur in open space – as opposed to close line play – but this rule applies anywhere on the field at any time.

“To all those [people] including those who made the rule,” 49ers cornerback Richard Sherman said in August. “I want a video of YOU running full speed and being lead by anything but your head while also attempting to bring down a moving target. You will soon realize it’s impossible.
The league expects players to adjust, either by keeping their faces up, by striking the opponent with the flipper of the shoulder pad, or by contorting their bodies to spin the helmet away from the opponent, striking him with something other than the thing covering the defensive player’s head.

“There is no ‘make adjustment‘ to the way you tackle. Even in a perfect form tackle the body is led by the head. The rule is idiotic and should be dismissed immediately. When you watch rugby players tackle they are still lead by their head.”

Whether the rule is realistic or not, the NFL, which is being sued by dozens of former players claiming to have suffered brain injuries playing the sport, is on a mission to make the game safer.

So expect a lot more fines for these kind of plays moving forward.

So perhaps teams should be careful promoting great blocks or hits by players that might violate the new rule.

And certainly avoid piping in audio making the hit look even more violent.