The gorgeous stainless steel firearm is a large frame, double action revolver chambered in the venerable .44 Magnum round. It is available with a 6-inch or 8-inch barrel. (Our Anaconda has a 6-inch barrel.)

As with the newest Colt King Cobra, the trigger on the Anaconda is second to none. It provides a clean, consistent pull and a crisp, repeatable release.

It is important to note that the Anaconda brings renowned Colt accuracy to the table. Colt barrels have long been known to produce incredible accuracy, shot after shot, and the barrel on the Anaconda is a testament to that Colt trait.

We made steel targets ring again and again both times we had the Anaconda at the range. The gun is designed so that recoil drives the firearm back instead up, greatly improving second shot acquisition.

The revolver ships with a fixed front sight and an adjustable rear sight which can be readily replaced with a Picatinny, optics ready rail.

We put the Picatinny rail and a Riton Optics X3 TACTIX PRD sight on our Anaconda: 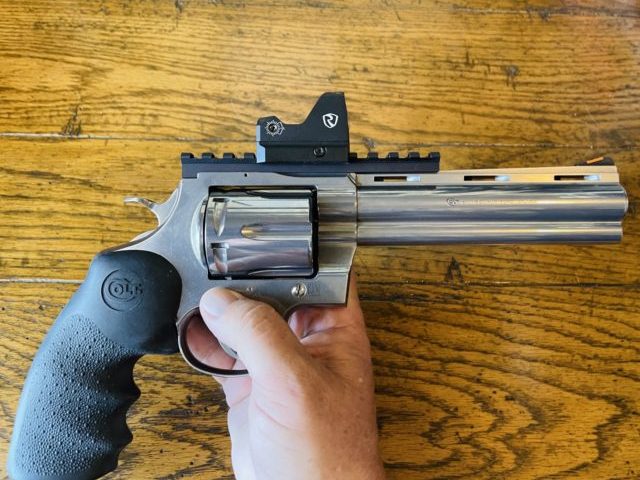 The Picatinny rail and sight transforms the Anaconda into a hunting machine, and we are eager to get ours on some wild hogs in central Texas.