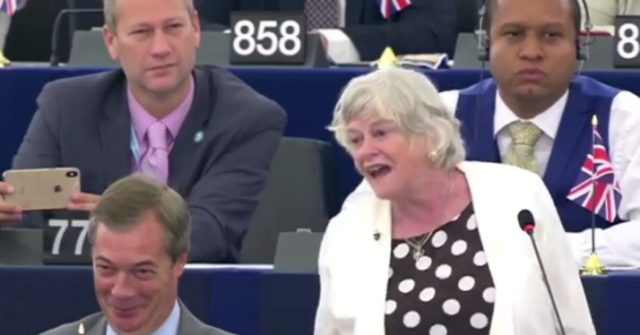 In a speech that came on July 4th, Widdecombe’s comments echoed the original Brexit — when the American colonies made a no-deal exit of their own from the British Empire and became the United States.

Vowing that the United Kingdom would do the same for the growing European empire, Widdecombe declared: “It is right because there is a pattern consistent throughout history of oppressed people turning on their oppressors.

“Slaves against their owners, the peasantry against their feudal masters. Colonies against their empires, and that is why Britain is leaving, and it doesn’t matter what language you use, we are going and we are glad to be going.”

Ann Widdecombe MEP: Britain was right to vote to leave, we’re off!

Widdecombe is on fire! pic.twitter.com/6bI01YHWAc

A Brexit Party spokesman followed up Widdecombe’s comments by telling Breitbart London: “Today we celebrate the Independence Day of our great ally the United States. It’s a timely reminder that leaving against the will of an Empire with no backstop and no deals in place can lead to a new leadership for liberty, decency, democracy, and tolerance.”

Explaining that her first experiences as a newly minted Member of the European Parliament (MEP) had confirmed to her that the United Kingdom had been absolutely right to vote to Leave the European Union, Widdecombe attacked the EU’s approach to democracy in her first address to the Plenary in Strasbourg.

The veteran Westminster politician used her distinctive oratory style to decry the European Union, saying: “If I needed any convincing at all that the best thing for Britain is to leave here as soon as possible, it was the way those elections [for the EU’s presidencies] were conducted yesterday.

“Because if that is this place’s idea of democracy, then that is a serious betrayal of every country that is represented here.

“Because it is not democratic at all, and that is just one reason why Britain is right to be leaving this place, hopefully on Halloween.”

Widdecombe’s comments were met with laughter and applause from her Brexit Party colleagues.

The United Kingdom was supposed to have had its own Independence Day on March 29th 2019, the legally mandated date on which the country should have withdrawn from the European Union. However, Britain’s political elite refused to honour the date, begging two further extensions of European Union membership from European leaders, with the most recent terminating on October 31st.

While Britain should theoretically leave on that date, Mr Farage had warned before March that if the date was delayed once, the line would have been crossed and Westminster would feel no hesitation to delay it again.

Speaking this week in Strasbourg, Mr Farage again questioned whether Westminster would allow Britain to leave the European Union, but warned if they failed to do so they would be wiped out by the Brexit Party in national elections.

WATCH Rees-Mogg: If Parliament Isn’t Running Scared of Being Replaced by the Brexit Party, It Should Be https://t.co/L8df6ysN67

Speaking to Breitbart London, Brexit MEP Annunziata Rees-Mogg said her party was acting as a check on the overwhelmingly Remain-voting London parliament, saying: “We are on their toes permanently and we’re keeping them honest. If they don’t deliver, their trust is broken and we are there to replace them.

“If the UK Parliament isn’t running scared, it should be. But not because of the Brexit Party, but because of its electors. If you ignore your electors you deserve to get a good kicking out of office. That’s what we’re here to make sure happens!”