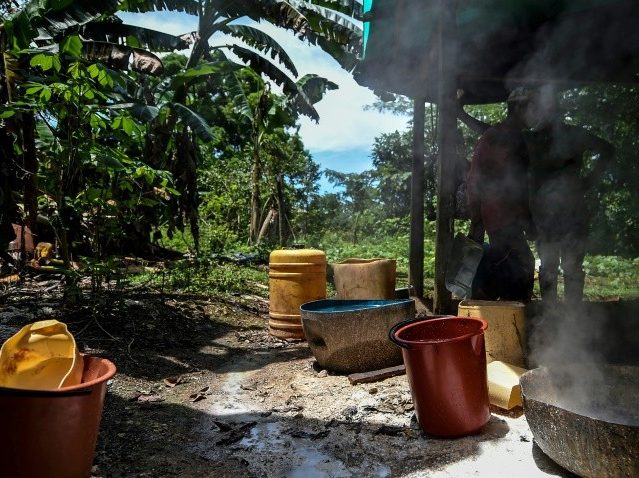 The United Nations Office on Drugs and Crime revealed in a report Wednesday that Colombia produced record yields of cocaine in 2017, a major blow to joint U.S.-Colombian investment in dissuading peasants from harvesting coca leaf and an outcome some conservatives predicted as inevitable to peace talks with the Marxist Revolutionary Armed Forces of Colombia (FARC).

Shortly before talks between the government of former President Juan Manuel Santos in Bogotá and the FARC began to yield some agreements in 2014, studies identified the FARC as the world’s wealthiest non-jihadist terrorist organization, and the wealthiest behind Hamas and the then-thriving Islamic State. While FARC leaders have claimed to abandon the drug trade, a significant percentage of low ranking members of the terrorist organization have refused to abide by the peace agreement and at least one FARC leader has been arrested on charges of high-volume cocaine trafficking.

According to Bloomberg, citing the UN statistics published this week, 171,000 hectares of land in Colombia was being used to grow coca in 2017, a 17-percent increase from 2016 and over triple the amount five years ago, early on in the terrorist peace negotiation process. The UN also noted that “potential” for growth increased another 31 percent in the past year, numbers unseen since 2001.

Bloomberg notes the number is particularly startling because it is significantly more than the previous record for amount of coca grown, held by the year 2000, shortly before President Bill Clinton launched Plan Colombia, an initiative to discourage farmers from growing the crop.

Bloomberg uses this fact to dismiss the effectiveness of Plan Colombia. Yet the number of hectares used to grow coca during the Bush era, when the White House worked closely with conservative President Álvaro Uribe to apply counterterrorism techniques to fighting cocaine trafficking, never went over 100,000. The major spike in cultivation occurred between 2015 and 2016, the year the Santos government imposed the FARC deal on the Colombian people despite the nation voting against it in a referendum.

Santos won the Nobel Peace Prize in 2016 for imposing the FARC deal, which granted the terrorist group legitimacy as a political party and ten uncontested seats in the Colombian Congress.

The FARC is also now free to celebrate its legacy openly, which includes the murder of at least 220,000 people and the disappearance of another 100,000, not including those killed by the forced abortion policy imposed on girl soldiers systematically raped by the Marxist terrorists. The FARC also enacted a widespread policy of kidnapping for ransom, rape of women in addition to girl soldiers, torture, and bombing rural villages.

On Wednesday, the head of the FARC, the terrorist known as “Timochenko,” posted an invitation to the country to partake in a celebration Sunday of the life of “Mono Jojoy,” a terrorist responsible for dozens of deaths of soldiers and attacks on military bases involving nearly 500 hostages.

Timochenko attempted to run for president in 2018, but ultimately had to cancel his campaign stops after being received at multiple venues by angry Colombian residents throwing garbage at him. He withdrew his candidacy after suffering a heart attack; at the time of his exit, he was polling at an average of 1 percent support.

Despite national repudiation of the terrorist group, ten members of the FARC are now in Congress, five senators and five representatives in the lower chamber, with full lawmaking powers. They face significant opposition from the conservative Democratic Center party, whose candidate Iván Duque swept the presidential election. The party was founded by the former president Uribe, who oversaw a significantly decrease in terrorist activity nationwide during his tenure.

This week, Duque announced that he would begin implementing “profound changes” in a second peace negotiation with the National Liberation Army (ELN), the second-largest terror group in the country. Santos began negotiations with the group following the conclusion of the FARC process.