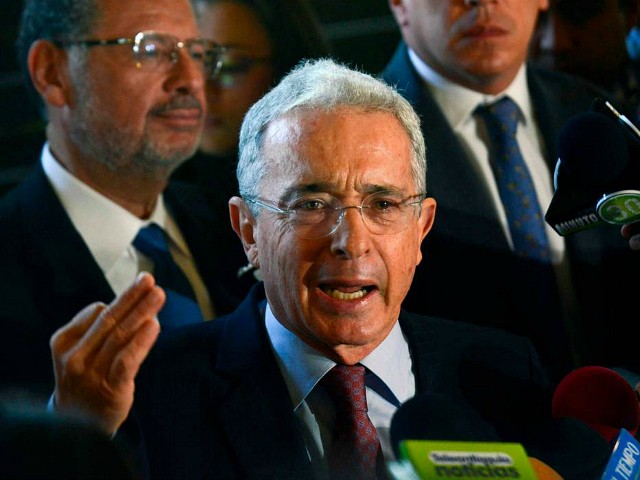 Former Colombian President Alvaro Uribe was attacked with a bag of mice during a session of Congress on Tuesday, prompting condemnation from all sides of the political spectrum.

During a session on Tuesday intended to celebrate the life of former president Belisario Betancur, a group of unidentified protesters lobbed a bag of four live mice in a parachute-like bag filled with confetti at Uribe and other members of his right-wing Democratic Center party.

Although the incident itself was not caught on camera, some senators reportedly shrieked and laughed and took their cell phones out to film the animals while others stormed the gallery to find the people responsible.

“It doesn’t matter who did this, but the person who ordered you to do so,” Uribe said after the incident. “It would be great to find out the coward who asked you to do this.”

Uribe, who served as the country’s president from 2001 to 2012, remains a polarizing figure in Colombian politics. Uribe’s tenure is characterized by cooperation with U.S. President George W. Bush to use counterterrorism tactics more common in the Middle East to weaken the Revolutionary Armed Forces of Colombia (FARC), a radical Marxist narco-terrorist organization.

Uribe remains an extremely influential figure in the country’s politics and was best known for his opposition to the peace agreement signed with the FARC under former leader Juan Manuel Santos, despite it being rejected in a nationwide referendum. The agreement legalizes the FARC as a political party and offers it free seats in the Congress that they do not need to win to keep.

Tuesday’s actions brought condemnation from all sides of the political spectrum, with politicians denouncing it as an anti-democratic gesture.

“FARC arrived in the Senate to talk about reconciliation and soon after, from the boxes, protesters threw a bag filled with confetti and mice. Coincidence?” wrote Democratic Center Senator Fernando Araújo. “We reject this action to sabotage the Senate plenary.”

“I respect critique, but this is an assault against the Democratic Center senators and the Senate plenary,” added Second Senate Vice President Angélica Lozano from the progressive party Green Alliance.

According to Semana, at least 20 protesters, including officials and visitors, claimed that the police arbitrarily detained them over the incident.

It is not the first time unusual protests take place in Colombian politics. In August, Green Alliance Senator Antanas Mockus lowered his pants and mooned legislators during a swearing-in ceremony of new lawmakers.

This year, Uribe’s protégé, former Senator Ivan Duque, was elected president of the country after seeing off a challenge from the far-left candidate Gustavo Petro. Since taking office in August, his tenure has focused on improving domestic security and attracting inward investment to boost economic growth.