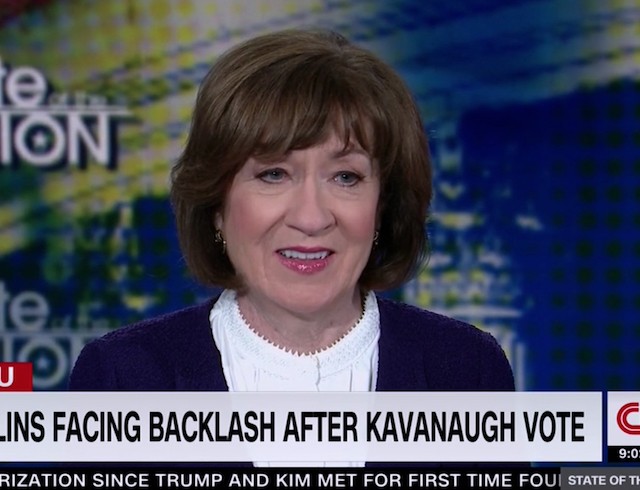 Sunday on CNN’s “State of the Union,” Sen. Susan Collins (R-ME) said now-Supreme Court Associate Justice Brett Kavanaugh’s denial of allegations of sexual misconduct was convincing, however,  his partisanship during his testimony went “over the line.”

Collins said, “I was certainly undecided and after hearing Christine Ford’s compelling and painful testimony I thought ‘Oh, my goodness, he perhaps needs to withdraw.’ But then when he came back with such a forceful denial and the anger and anguish that he showed, and then the lack of corroboration led me back to the fundamental issues that are fundamental to our legal system of a presumption of innocence and fairness.”

She added, “I put myself in his shoes. He is coming forth and answering an allegation that includes that he was involved in gang raping and doping girls. I mean, that is so devastating. I think he reacted with anger and anguish as a father of two young girls, a 10-year-old and a 13-year-old. I did believe that he should not have taken the shot at the Clintons and that in his questioning with certain senators responding to their questioners, particularly Amy Klobuchar, that he stepped over the line.”