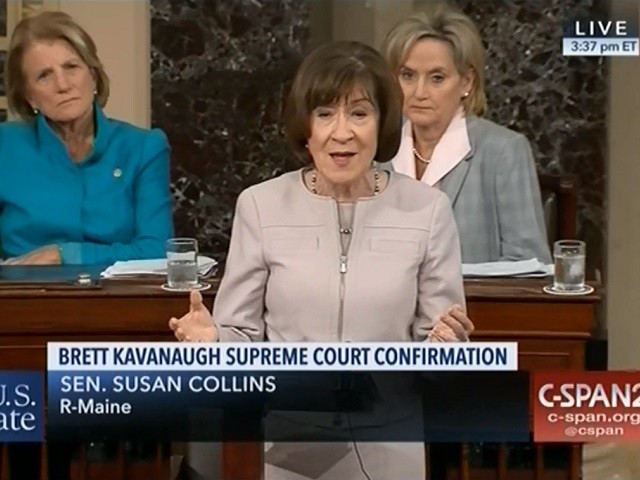 During a speech on the Senate floor on Friday, Senator Susan Collins (R-ME) stated that she will vote for Supreme Court nominee Judge Brett Kavanaugh and Dr. Christine Blasey Ford’s allegations against Kavanaugh do not meet a “more likely than not” standard.

After discussing her decisionmaking process, criticizing some of the opposition to Kavanaugh, and recapping his judicial record and statements, Collins turned to the sexual assault allegations against Kavanaugh.

Collins continued that the “outlandish” claim that Kavanaugh participated in gang rapes is a clear example of why the presumption of innocence is important.

Collins then turned to the charges made by Dr. Christine Blasey Ford. Collins said she believes Ford is a sexual assault victim, but none of the witnesses she named could corroborate her story and no one has come forward to back up Ford’s story.

Collins concluded that Ford’s allegations do not meet the “more likely than not” standard.

She then concluded her speech, “Mr. President, I will vote to confirm Judge Kavanaugh.”