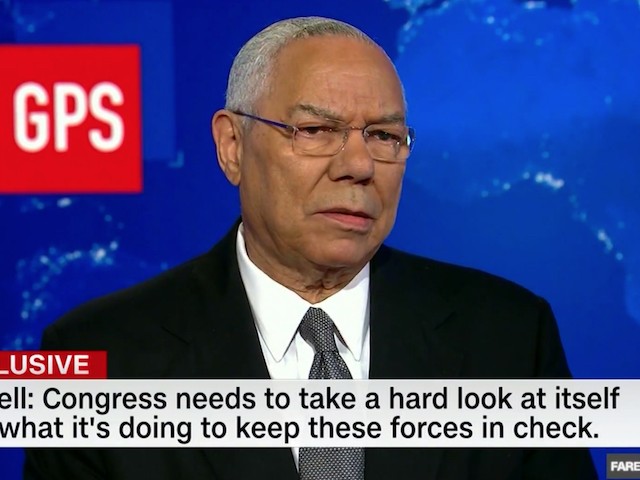 Powell said “We’re walking away from agreements. We’re walking away from the alliances that we used to have. The president goes to Europe to a NATO meeting, but he starts out by insulting some of the other participants, our allies. America has to take a hard look at itself. Especially the Congress. take a hard look at yourself and see what we are to try to keep their forces in check and put America back in the middle of all this as opposed to a reluctant player and trying to pull out agreements rather than helping to make new agreements.”

He continued, “With respect to Charlottesville, and not just Charlottesville but a general situation within the country —I’m deeply troubled by what happened in Charlottesville but also by the fact that we are now seeing these fissures to break out in our society between blacks and whites, immigrants and those who are not immigrants. This is so unfortunate. When I look at what’s happened in the last 50 years, and what I have been able to do is as a son of immigrants and a black kid, rise to the top of our government, I’m so proud of that. And yet we still have these forces that are pulling us apart. Those forces are being encouraged by some of the things that are happening in political life. We should not let that happen.”

When asked if Trump is a moral leader for the world, Powell said, “I don’t know that he can do that. Because right now that is not the way he is acting.”

He added, “My favorite three words in our Constitution is the first three words, ‘We the people. We the people.’ Recently, it has become me the president as opposed to we the people. You see things that should not be happening. How can a president of the United States get up and say that the media is the enemy of Americans? Has he read the First Amendment? You are not supposed to like everything the press says, what anyone says in the First Amendment. That’s why we have a First Amendment, to protect that kind of speech. If we keep doing things like this and creating additional fissures, it’s not going to serve us well on the international stage. I hope the president can come to the realization that he should really stop insulting people.”