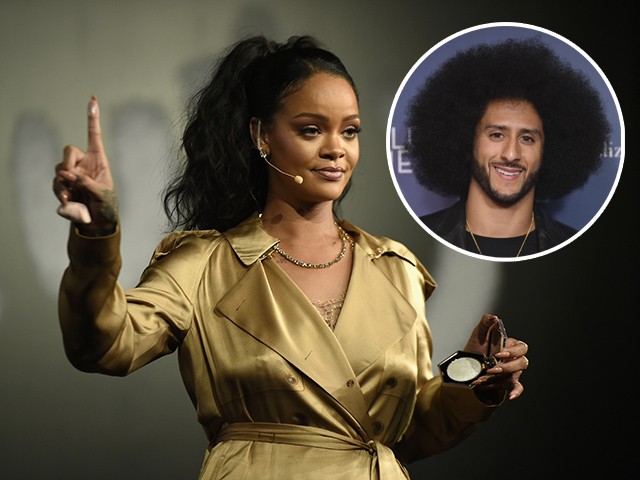 In a series of posts to her Instagram, Rihanna mocked people who watched the Super Bowl, posted a picture of former NFL quarterback Colin Kaepernick kneeling, and wrote, “for those of you who thought I was watchin super bowl…we beefin.”

Kaepernick responded to her boycott with a message of appreciation.

Rapper Cardi B declined an opportunity to perform at the Super Bowl over the NFL’s treatment of Kaepernick as well.

“I got to sacrifice a lot of money to perform. But there’s a man who sacrificed his job for us, so we got to stand behind him,” she said last week.

Rihanna made headlines in November after accusing the U.S. of “terrorism” after Border Patrol used tear gas against migrants trying to storm the border.

The 30-year-old also threatened President Trump over the usage of her song “Don’t Stop the Music” at his rallies.

“[M]e nor my people would ever be at or around one of those tragic rallies,” she said in November.

Not for much longer…me nor my people would ever be at or around one of those tragic rallies, so thanks for the heads up philip! https://t.co/dRgRi06GrJ

In a letter sent to the White House, her attorneys wrote, “It has come to our attention that President Trump has utilized [Rihanna’s] musical compositions and master recordings, including her hit track ‘Don’t Stop the Music,’ in connection with a number of political events held across the United States.”

“As you are or should be aware, Ms. Fenty has not provided her consent to Mr. Trump to use her music. Such use is therefore improper.”