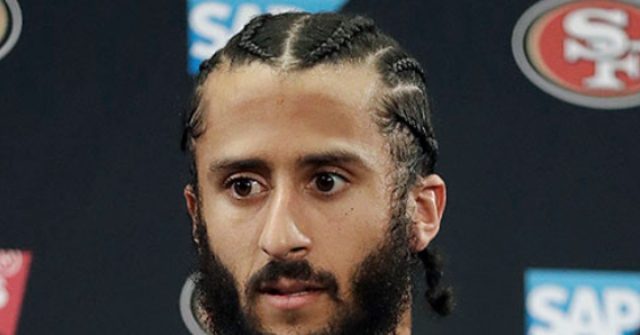 Former NFL anthem-protester Colin Kaepernick chose Independence Day to post an out of context quote from famed former slave and abolitionist Frederick Douglass, in which he referred to America as “shocking and bloody.”

On Independence Day, Kaepernick posted a segment of Douglass’ speech: “What to the Slave Is the Fourth of July?” delivered on July 5, 1852, nearly a decade before the Civil War.

“What have I, or those I represent, to do with your national independence? This Fourth of July is yours, not mine…There is not a nation on the earth guilty of practices more shocking and bloody than are the people of these United States at this very hour.”
– Frederick Douglass

“What have I, or those I represent, to do with your national independence? This Fourth of July is yours, not mine…There is not a nation on the earth guilty of practices more shocking and bloody than are the people of these United States at this very hour.”
– Frederick Douglass pic.twitter.com/IWLujGCJHn

The quote, though, is out of context because Douglass’ speech was not one meant to wholly condemn America. In fact, even as his fellow blacks were still enslaved in the U.S., he ended his speech on a positive note by saying that the promises in America’s founding documents offered as much hope for freedom to blacks as it does whites.

After slamming America for its sin of practicing slavery, Douglass ended in hope:

I, therefore, leave off where I began, with hope. While drawing encouragement from the Declaration of Independence, the great principles it contains, and the genius of American Institutions, my spirit is also cheered by the obvious tendencies of the age. Nations do not now stand in the same relation to each other that they did ages ago. No nation can now shut itself up from the surrounding world, and trot round in the same old path of its fathers without interference. The time was when such could be done.

Douglass’ relationship with the U.S.A. was understandably complicated. But he always tended to feel that America was a great nation with a flawed history. Indeed, he also called the U.S. Constitution a “glorious liberty document” in that very same speech.

Douglass knew that the “American genius” was a promise for all men, not just whites, and it was a promise built into the country from the very beginning.

His tweet did not bring many supporters. While some few replies did sign onto Kaepernick’s anti-American angle, most replies slammed the former NFL player for his Independence Day attack.

Aaron Riley, for one, gave the quick reply that many Twitter uses did saying, “Feel free to leave.”

But dozens of others were just as unhappy that Kaepernick was attacking the U.S.A. on our nation’s day of Independence.

I could make a montage of all of your failures in the NFL and people would still call you a great QB. So, you can point out this countries failures all day long and people will STILL consider this a GREAT nation and be a #ProudAmerican. #GodBlessAmerica

Leftists can only celebrate their desire to being down the greatest country ever created.

There are plenty of nations on this Earth who committed crimes against humanity far greater than the bloody history of the USA. Anyone who read a History book other than the ones put in front of them by teachers knows that.

Did Colin read to the end?

Douglass praises the Constitution as a “Glorious liberty document” and says he draws hope from the Declaration, its principles, and the genius of our institutions.

But alas, we need to dump on the flag that represents these.https://t.co/iKjB6TsMgW

better men than you have been carried and buried into that flag. No place in the history of man has allowed people to realize their potential like America. We had our Dark Times but it is only racist people like you holding us back. God Bless America! pic.twitter.com/aRM3JYdRDR