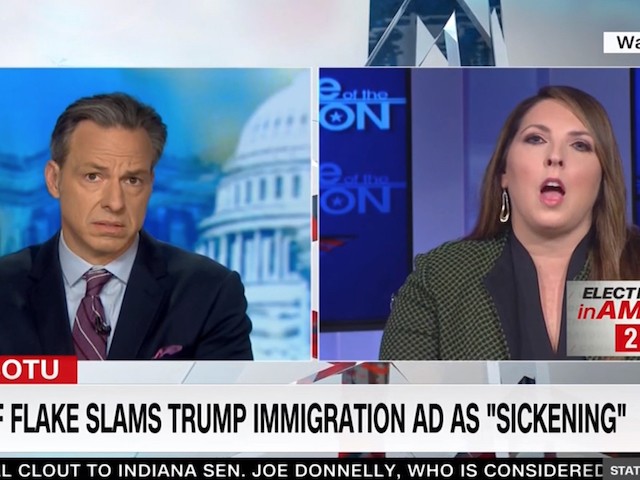 TAPPER: That web video you Don’t have any issue with that?

MCDANIEL: Democrats Time and time again won’t work with him.

TAPPER: It is factually inaccurate and racially incendiary and You Don’t have any issue with that?

MCDANIEL: I have an issue with our immigration system that’s not being fixed and Democrats won’t work with the president. And we have caravans coming. Listen, Jake. in eight years, asylum claims are up 1,700%. By the way, what about the 12,000 kids that have come here unaccompanied? We have an immigration system that is attracting young children to come here alone without their parents why do we have that? Why aren’t we fixing that?

TAPPER: You think the president —do you really think — You know, I completely agree with you that there needs to be a big immigration reform bill and Democrats and Republicans need to come together. Do you really think that is what President Trump is doing?

MCDANIEL:  Where are the Democrats talking about this? Are they saying, let’s solve the problem? they haven’t said one thing about that. They’re not saying anything about these 12,000 kids.

MCDANIEL: We didn’t want him in the country! He killed police! That’s not good. This is exactly why our immigration system is failing and he’s pointing that out. And by the way, he did come in under Bill Clinton. So he’s come in twice.

TAPPER: And then Clinton deported him.

TAPPER: Is that the Democrat’s fault?

MCDANIEL: While the majority of people coming here want good things, there are bad actors.

TAPPER: Of course, and he was a monster and sentenced to death and good riddance. But was his presence in the United States the Democrats’ fault?

MCDANIEL: And there’s only one person right now talking about fixing it and that’s the president.

TAPPER: That’s my point, it’s the systemic failure. Democrats and Republicans. That’s the failure. But he blamed it all on Democrats, so how can you expect Democrats —

TAPPER: I know you want to change the subject to Democrats but Republicans control the House, the Senate, and the White House.

MCDANIEL: And they should be fixing the immigration problem.

TAPPER: Democrats, the minority party, should be fixing the immigration problem? You control the White House, House, and the Senate.

MCDANIEL: They should be working with the president. We don’t have a filibuster-proof senate. weapon only have 51 senators.

TAPPER: You couldn’t get legislation through the House.

MCDANIEL: Well, what Democrat is leading on any issue? How many of them are coming to the table saying, I have a solution. Let’s work with this president? Name one that said, let’s unify this week, when the president went forward and said, this is a time to unify. They said, “No,” We’re going to make it political again. I do not see a single Democrat say, let’s bring this country together. I only see them running on resist and obstruct. Even with these good economic numbers, they can’t even tout how good our country is doing right now. So, yeah, the president’s leading, he’s saying, come to the table. We have major issues we need to face.