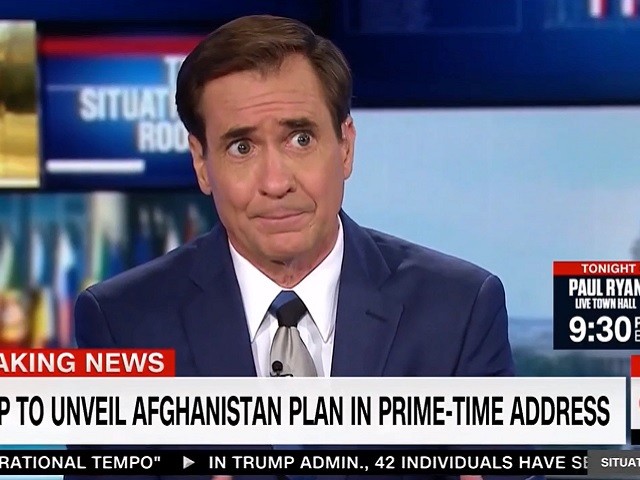 Thursday on CNN’s “Inside Politics,” network Military and Diplomatic analyst retired Rear Admiral John Kirby, who served as the spokesman for the State Department and the Department of Defense during the Obama administration, said President Donald Trump’s Thanksgiving call to the military this morning was “completely inappropriate.”

Kirby said, “It was completely inappropriate. Look, all he needed to say is thanks to you and your families, and I support your mission, and I am going to continue to support it going forward. Very simple. That is all he really needed to say. He found a way to inject judicial court decisions he doesn’t like on immigration and trade deals he finds unfair — not a good place to put the troops. They are not an extension of the MAGA crowd. They are not an arm of the Republican party.”

He continued, “It’s an apolitical institution that defends and supports the Constitution. That’s where it should have stayed.”

He added, “There was a part of me that was happy he didn’t go to Arlington National Cemetery on Veterans Day. It seems he can’t be around us without politicizing the event and them as an extension of it. There is also part of me that doesn’t want to see him go to the war zones. Yes, it’s an obligation, but I worry it will end being like today’s call, and he’ll end up politicizing it and them and the mission, and that’s again, completely inappropriate.”