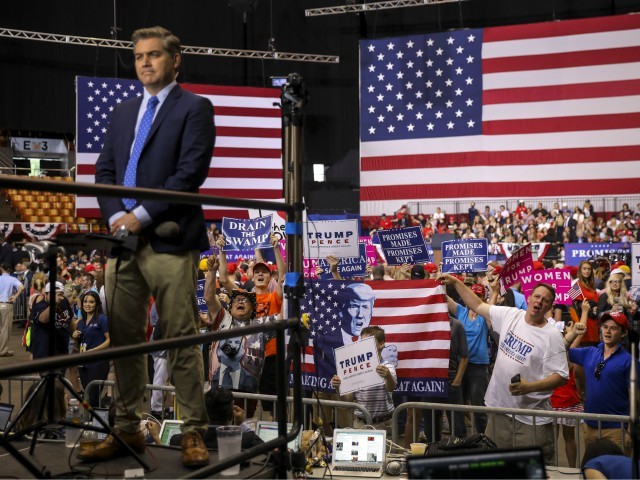 “If you want to ask me what makes me most depressed about my job, it’s covering the rallies. It gets to the larger point of what it’s like covering the President of the United States, and in particular Donald Trump,” Acosta said, according to AdWeek.

“In many ways the danger is not what Trump is doing to America, the danger is how America is changing under Trump,” he added. The CNN reporter also said that Trump was a “deceptive, dishonest person” and “the original birther in chief.”

The reporter recently had an interesting experience at a Trump rally, culminating in Acosta sending a Twitter direct message reading, “Fuck you,” to someone who made fun of him.

Acosta sent a tweet complaining about the sound at a Trump rally, saying, “Tonight the Trump campaign/WH turned up the music so loud the press risers were vibrating. Nearly impossible to do live TV. I suppose the WH loves those kinds of shenanigans. But I wonder if it’s a security concern for USSS or local law enforcement. They can’t hear either.”

After Caporale tweeted this, Acosta messaged him, “Fuck you.”

The CNN reporter later apologized, tweeting at Caporale, “Hey buddy I thought you were an old friend from the campaign days. I’m so sorry. Hope I didn’t offend you. Have a good night and take care.”

Hey buddy I thought you were an old friend from the campaign days. I’m so sorry. Hope I didn’t offend you. Have a good night and take care. https://t.co/4u9fj1BNPI