CNN aired a segment about Stormy Daniels’ new book that described what Donald Trump’s genitals looks like on The Lead with Jake Tapper Tuesday.

“Lots of books claim to be tall-alls, but they don’t follow through. Stormy Daniels’ new book about her life is not that book. Wow. She tells all,” Jake Tapper said to introduce the segment.

Sara Sidner, a CNN correspondent, described a section of the book where Daniels writes about her alleged sexual encounter with Trump in 2006.

When Daniels came out of the bathroom, she claims Trump was lying on the bed in his underwear. They had sex. She then describes his genitalia in great detail. “His penis is distinctive in a certain way,” she writes. Proof, her attorney Michael Avenatti says, she is tired of being called a liar by Trump’s people. 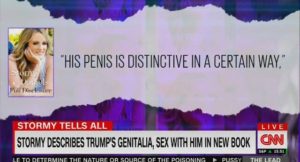 “Journalism” like this coming from CNN may be why they’re having trouble attracting viewers lately.

In between the network’s anchors giving moralizing lectures on immigration, strange on-air meltdowns, and literal fake news, it’s no surprise that their ratings are dropping.

During the September 3rd-9th week, the network dropped 41 percent in daytime ratings and 36 percent in prime time ratings compared to the same week last year.

In the month of August as a whole, CNN’s ratings took a double digit drop compared to last year.