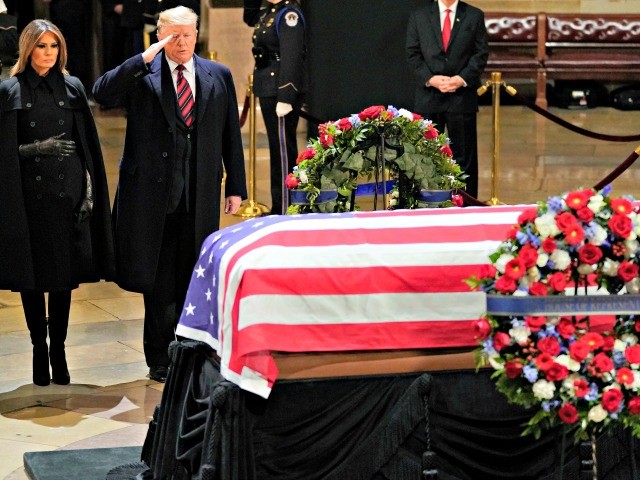 Trump will not speak at the funeral but will reportedly meet privately with the family.

Brinkley mentioned that Trump has been “no friend” of the Bush family since the 1980s.

“As early as the 1980s, Bush 41 distanced himself from Trump. Trump used to volunteer to say I want to be the Vice President instead of Dan Quayle back in 1988,” Brinkley said.

And then of course when he eviscerated that Jeb Bush, low energy and attacked George W. Bush for his foreign policy, but he is going to be there. And what’s going to be interesting, people will be looking to see who comes up to him, how does everybody act? Here he says that Barack Obama bugged Trump tower. He has accused Bill Clinton and Hillary Clinton of crimes and she should be in jail. And they’re all going to be sitting there in pews. So people will have to endure the fact that President Trump is there, but it’s good that he is there.

Brinkley said he is also concerned about potential “strange tweets” from Trump during the funeral “because of all the Mueller investigation things coming out.”

“He very well may be behaved during the ceremony and 15 minutes later writing strange things,” Brinkley said.

Lemon was dumbfounded that the Bush family would even extend an invitation to Trump the “bully.”

“I do not understand why they want him to be here. You have your reasons, but again, I just… I would not want him,” Lemon said. “That would be the biggest and better lesson to teach someone who is a bully. Sorry. Not invited.”

According to a Washington Post report, the Bush family reached out to the White House over the summer to assure Trump “that the focus would be on Bush’s life rather than their disagreements.”

A Bush confidant told the Post: “The comparisons are presenting themselves; we are not heightening them.”