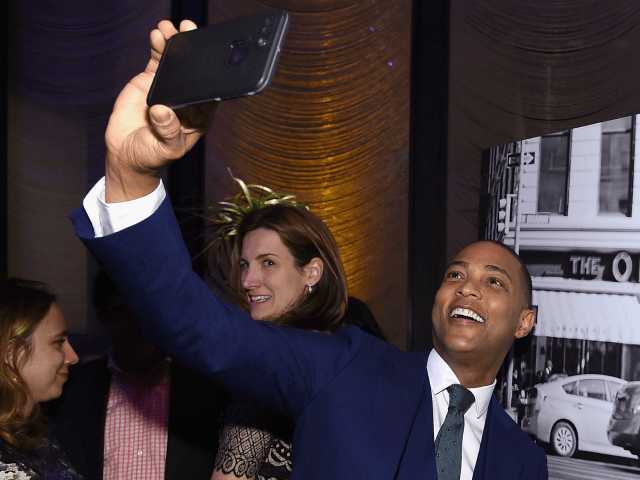 CNN pundit Don Lemon used rap star Kanye West’s dead mother to attack him for his political views Thursday, saying that if his mother were still alive, she “would be embarrassed” by his White House visit with President Trump.

“We need to take the cameras away from Kanye and from a lot of this craziness that happens in the White House, because it is not normal and we need to stop sitting here pretending that it’s normal,” Don Lemon said.

“This was an embarrassment. Kanye’s mother is rolling over in her grave,” he continued.

“I spoke to one of her friends today, or texted with one of her friends today from Chicago, Donda’s friends, I used to live there, I know ’em. She said, ‘Donda would be embarrassed by this. She would be terribly disturbed by this.’ And Kanye has not been the same since his mother died. He kept talking today about ‘Oh, I put the hat on and the hat made me feel strong and wearing a cape’–he needs a father figure.”

Many voiced their objection to what Lemon said on Twitter:

As someone whose mom died early, this really pisses me off. Saying Kanye’s late mom is “rolling over in her grave,” is about as low as you can possibly go when trying to hurt someone. I don’t understand what CNN is doing. https://t.co/T2lNLI07jK

Really @donlemon? This is how you want to get a point across? By bringing up a mom who’s death devastated her son? Shame on you. This is beyond awful. https://t.co/RWXAKXzOa3

Utterly despicable & racist network @CNN is using Kanye’s dead mother as a means to try to draw blood. @donlemon you are TRULY in the sunken place. Using a dead woman to attack a free black man for refusing to bow to your liberal masters is shameless, crass, & soulless. https://t.co/vQ64rSEeeE

“Kanye’s mother is rolling over in her grave” – Don Lemon of CNN.

This is one of the most disgusting comments I have EVER heard. Because Kanye supports President Trump, Don Lemon uses Kanye West’s deceased mother to attack him. DISGUSTING, @CNN! https://t.co/jBfk25RYq1

Please @cnn, never let someone use another’s dead mother as a vessel for their emotional beliefs.

Absolutely disgusting. @CNN, you would never allow this to stand if this was said about any of your favorites on the left or a Never Trumper (but I repeat myself). https://t.co/XMoLxIhkE4

And to be clear, @donlemon, I just lost my mother not long ago. It is an absolutely life-changing and devastating life event.

It doesn’t matter what you think of Kanye or his politics/beliefs, you owe him a damn apology for invoking his late mother.