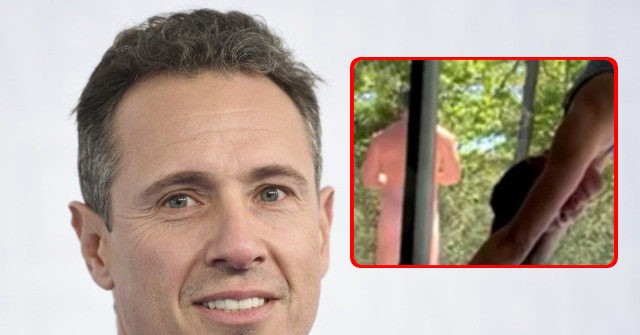 CNN primetime host Chris Cuomo appears to have been spotted naked in the background of a yoga video his wife shared to Instagram.

A nude man who resembles Cuomo was caught with parts of his back and buttocks exposed as Cristina Cuomo was doing yoga for her followers on May 27, prompting social media users to wonder if it was in fact the Cuomo Prime Time anchor.

“So my bf was watching Cristina Cuomo livestream on IG earlier and Chris was stark bollock naked in the background outside,” tweeted one user.

The video was quickly deleted after it was shared to Instagram, according to the New York Post.

In March, Cuomo made headlines after announcing that he had contracted the Chinese coronavirus. The anchor said he planned to quarantine in his basement to prevent his wife and children from also getting sick, though Cristina, and 14-year-old son, Mario, ended up catching the illness.

During Cuomo’s illness, a biker who identified himself as David, told the New York Post that he witnessed the host violating quarantine on Easter Sunday by taking his family to inspect an undeveloped property in East Hampton. David alleged that when he confronted Cuomo about breaking quarantine, the CNN host verbally accosted him. The biker, a lifelong Democrat who voted for the CNN host’s brother, New York Gov. Andrew Cuomo (D), said he was so shaken by the incident that he filed a report with the East Hampton police.

To top off Cuomo’s saga with coronavirus, CNN released reality TV-style footage of the host making a dramatic “official reentry from the basement” to greet with his family.