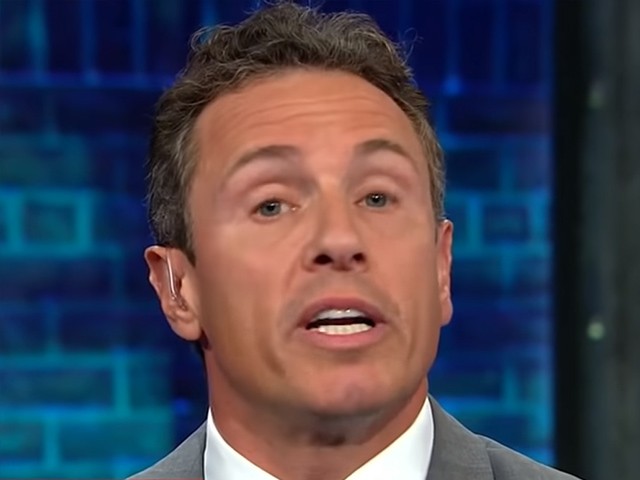 CNN personality Chris Cuomo once again whitewashed Antifa on Tuesday night, asserting that when it comes to violence and intimidation of the media and politicians, “it’s not a both sides situation.”

Chris Cuomo and his two panelists Angela Rye and Steve Cortes were discussing President Trump’s rhetoric towards the media, among other things, when Rye accused Trump of putting “people’s lives in danger.”

“Do you know there are people who sit on this network, who are getting death threats because of your president’s rhetoric? That is the truth,” she said.

Cortes responded, “Angela, you know what? I do know there’s people getting death threats. You know why? Because I happen to be one of them, okay, because the vitriol in this country…It’s because of the left. It’s because of Antifa, quite frankly.”

Cuomo said, “Is that why that guy sent me a bomb? Is that why we have bombs sent here, because of Antifa?”

“Wait, are you saying that Antifa is not violent?” Cortes shot back.

“I’m saying that’s not who sent the bomb to my office, Steve. This is over, let’s take it up after Thanksgiving,” Cuomo said, also saying, “When somebody threatens you and your family and your safety, I hope that the first thing that comes to mind is, ‘Well, you know, there are bad things that other people do too. I guess I won’t take it too personally.’”

“Steve, don’t distract from something like somebody sending a bomb to our offices, because he was picking up on what was being put down by the president of the United States. Don’t hide from the facts, it’s not becoming,” Cuomo continued.

Cortes said, “There is political violence and political threats on both sides of this country and that’s a problem.”

The segment continued with more bickering and arguing like that. Frankly, I don’t even know why Steve Cortes or most of these pro-Trump CNN pundits even go on these shows anymore. The entire segment is just him getting ganged up on by Cuomo and whichever liberal pundit he has on the show that day, in this case, Angela Rye.

But let’s get down to what Cuomo said.

It’s not a both sides situation? That claim is not only false, but by denying the fact of Antifa violence, Cuomo is offering defense and cover to left-wing intimidation tactics.

In just the last month, Fox News host Tucker Carlson’s home was surrounded by Antifa who intimidated and terrorized his wife who was home alone. Don’t worry, CNN was too busy worrying about whether or not Tucker’s door was cracked.

In September, Ted Cruz and his wife were hounded out of a restaurant by Antifa protesters who explicitly stated that their goal was to make him feel “unsafe.” Don’t worry, CNN also defended that.

And in August, under the guise of “fighting hate,” Antifa randomly attacked journalists, police officers, and bystanders. Antifa also participated in a chant explicitly calling for the destruction of America.

These examples are just small potatoes compared to the violent harassment that conservatives and Trump supporters around America have experienced over the past three years. Breitbart News’ John Nolte has chronicled 639 incidents of violence and harassment targeting Trump supporters.

So what is Chris Cuomo even talking about? Just because he isn’t being targeted by Antifa, it’s not a problem?

If Cuomo is actually so worried about attacks against the media, it seems like he might want to pay more attention to Antifa, given the numerous examples of Antifa attacking journalists.

But then again, that would go against CNN’s, and Chris Cuomo’s past of defending Antifa.