“Your prime minister, Prime Minister Orbán, has repeatedly said that his main aim is to preserve, quote, ‘Christian Hungary’, and you’ve said ‘We don’t accept that multiculturalism is a value by itself’,” Amanpour said to Szijjártó, apparently horrified.

“It’s weird, that kind of language, isn’t it? It’s very out of step with the world,” she asserted.

“No, it’s honest,” the Hungarian responded matter of factly.

“It’s honest? OK, it’s honest from your perspective,” Amanpour pressed on. “But what are you saying? That anything other than white Christians into your country are not accepted?”

“No, no-one said, that,” Szijjártó replied.

“Yeah, yeah, yeah, excuse me,” Amanpour interrupted immediately, glancing down at her notes.

“We have been a Christian country for a millennium, and I don’t really understand why is it bad news that we don’t want to change that,” the Hungarian answered, seemingly unperturbed.

“I understand we don’t agree, but I respect that you have a different position… But I expect the same, so please, let’s leave it to a sovereign decision of a nation how it would like to continue its life in its own country… Yes, we think that a country sticking to its heritage, its culture, its religion, is as valuable as another one which thinks that multiculturalism is better than that.”

Amanpour also attempted to take Szijjártó to task on the subject of the migrant crisis, in which the Hungarians led the counter-charge against German leader Angela Merkel’s now partially abandoned come one, come all policy by constructing border barriers which have cut illegal migration by over 99 percent, and by refusing to accept EU-imposed migrant redistribution quotas.

The CNN anchor took particular umbrage with Viktor Orbán’s characterisation of illegal migrants as “invaders” and potential terrorists, but his foreign minister stood by it.

“They violate your border, they disrespect any kinds of regulations, they are not ready to co-operate with your local authorities, they attack your police, they cause injuries to your police,” he said, rejecting Amanpour’s description of the migrants as “war refugees and others who have come in fear for their lives”.

“What is the legal or moral grounds for anyone to violate the border between two peaceful countries? These people came through Serbia, Croatia, Macedonia, Bulgaria, Greece, Turkey — all peaceful and safe countries,” he continued.

“It’s not a fundamental human right that you wake up in the morning, you pick a country you would like to live in, like Germany or Sweden, and to get there you violate a series of borders. This is not the way it should work out,” he insisted. 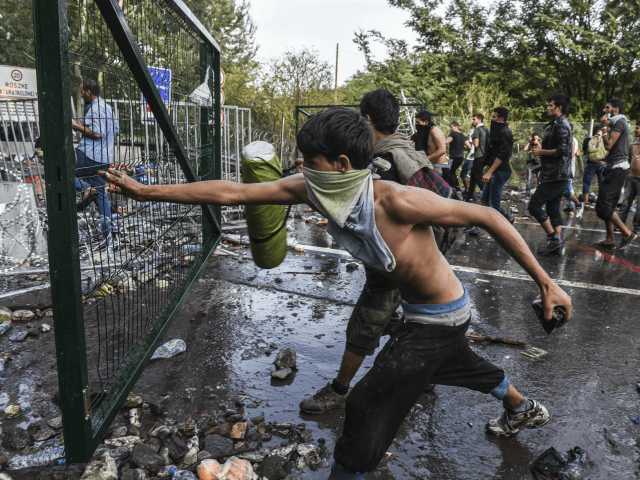 Migrants throw rocks and try to remove the gates during clashes with Hungarian anti-riot police at the Hungarian border with Serbia near the town of Horgos on September 16, 2015. (ARMEND NIMANI/AFP/Getty Images)

Amanpour also issued a series of rapid-fire criticisms of the Hungarian government on a range of other topics, including its disagreements with billionaire financier George Soros, an atheist open borders campaigner or Jewish heritage, and the new ‘Stop Soros’ laws aimed at punishing individuals and organisations which aid and abet illegal migration.

Szijjártó rejected any suggestion that the Hungarian government’s “very serious” issues with Soros had anything to do with his religious background — indeed, he claimed the Jewish community in Hungary was undergoing a “renaissance in its cultural life” under Prime Minister Orbán — and instead insisted that their disagreements with the plutocrat hinged upon his push for a “post-national, post-Christian” Europe with immigration running at a million a year.

He also rejected the CNN anchor’s description of the ‘Stop Soros’ laws as “kind of shocking, on a basic human level, [punishing] ordinary activists, civilians, lawyers, who want to help some of these poor people who are fleeing in danger of their lives”.

“People who criticise Hungary on such issues, I always ask, ‘Man, have you read what you are speaking about?’”, the Hungarian replied, insisting that the law was not intended to punish people who simply try to “help” asylum seekers, but only those who promote “illegal opportunities” for people to violate Hungary’s borders and abuse the asylum system — suggesting that such activities are also illegal in the United States.

Finally, the pair clashed on the subject of Hungary’s status as a so-called ‘illiberal democracy’ — a pejorative term which Hungary’s government has chosen to embrace.

“That sends chills through the hearts of many people who believe there’s either democracy or autocracy,” Amanpour began, somewhat dramatically. “What is ‘illiberal democracy’ and why is it a good thing?”

“Thank you very much for asking, because I can explain what [Orbán] said, because it’s been mischaracterised,” Szijjártó smiled.

“We are faced with a phenomenon that when it is not the liberals who win an election, then it is immediately considered as not a democracy,” he explained — using ‘liberals’ in the generic sense of left-wingers, as the term is often used in America.

“I give you one example: we won the latest elections in April, for the third time, with a constitutional majority… hundreds of thousands votes we have more than all other parties in parliament together.

“So what was the reaction of European Union, for example? That the Hungarian people are not smart enough to make a decision about their own future… immediately after it’s not the mainstream liberals who win, then it’s considered immediately as not a democracy,” he said.

“So what is ‘illiberal’?” Amanpour asked again, apparently wrongfooted by this explanation.

“It is a democracy when it is not the liberal parties who win,” the Hungarian laughed.