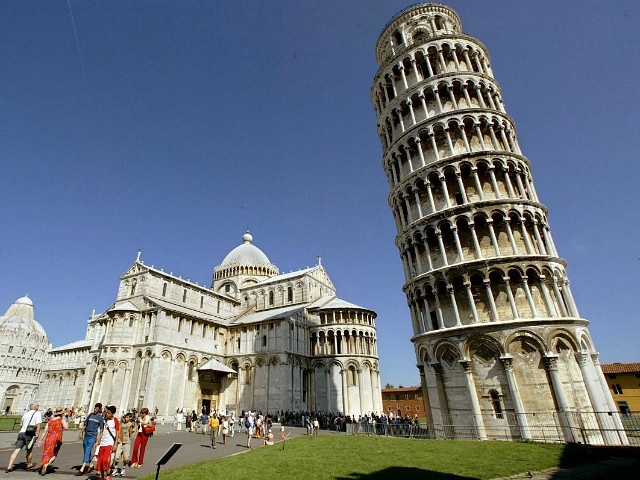 Swift action is required to preserve dozens of World Heritage sites from the “high risk” of extensive damage from climate change, CNN reported this week.

Drawing from a study published Tuesday in the journal Nature Communications, CNN urged people wishing to visit the historic wonders of the world around the Mediterranean to do so quickly.

“You’ve got a lot of traveling to do if you’re going to see some of the historical wonders of the world before climate change further damages them,” the article warns, adding that flood risk “may increase” by 50 percent and erosion risk by 13 percent in the area by the year 2100, “with considerably higher increases at specific World Heritage sites.”

Where, previously, damage was caused by winds, rain, hurricanes, earthquakes, and floods, now it seems that the real culprit is not the weather but “climate change.”

CNN illustrates its warnings with a series of photographs of beautiful places most at risk from climate change, including the Israeli port city of Haifa, villages in the “Cinque Terre” area of Italy, the ancient city of Ephesus, the Blue Mosque and Hagia Sofia in Istanbul, and the iconic Leaning Tower of Pisa.

These World Heritage sites could be damaged or destroyed by climate change https://t.co/ioKUiKn0wh pic.twitter.com/M7us6llzEE

Since no data is available on future events (for obvious reasons), the researchers assessed the danger for Mediterranean cultural World Heritage Sites (WHS) by resorting to predictions based on models of possible future scenarios.

More precisely, the team attempted to determine how much damage would be caused by two variables — coastal flooding and erosion — under “four sea-level rise scenarios until 2100.”

“Here we show that of 49 cultural WHS located in low-lying coastal areas of the Mediterranean, 37 are at risk from a 100-year flood and 42 from coastal erosion, already today,” the study states. “Until 2100, flood risk may increase by 50% and erosion risk by 13% across the region.”

If readers are puzzled to find the words “we show that” followed by “risk may increase” in a scientific study, they are justified in doing so. Anyone could show that any risk “may increase” just by demonstrating that it is possible. Whether it is probable is another question.

Trying to quantify future possibilities is a notoriously tricky business.

One surmises it may also rise by 350 percent, or then again, it may not rise at all.

Moreover, while analyzing the potential damage to WTSs by erosion and sea level rise, the study never bothers to try to link these tangible events to the rather more ethereal construct known as anthropogenic climate change.

The researchers seem to take for granted that if sea level rises, climate change must be behind it.

And yet, while describing the dangers faced by the Italian city of Venice from rising sea levels, CNN inadvertently concedes that this is nothing new and can hardly be blamed on “climate change.”

“In reality, Venice floods regularly, and has done so for centuries,” CNN observes.

Unfortunately, both the CNN piece and the study inspiring it read much like the glossy brochures of slick fundraisers, urging immediate action to preserve treasures from imminent disaster.

The climate fundraisers have the added bonus of human guilt to encourage people and nations to dig deep into their pockets. If damage to historic sites were merely a natural meteorological affair — an “act of god” — no one would be responsible. Human-induced climate change, on the other hand, means that humanity — and especially the wealthy developed nations — have the responsibility to right the wrong that they have foisted on the world.

The study said that only two of the 49 World Heritage Sites — the Medina of Tunis and Xanthos-Letoon — appear to be safe from climate change-related flooding and erosion by the end of the century, which CNN qualified as “grim findings.”

“Adaptation planning is urgently needed,” warns Lena Reimann, the lead author of the study. “If our common heritage is destroyed or lost, it is not possible to replace or rebuild it.”

“If rigorous climate change mitigation is pursued as planned under the Paris Agreement,” said Reimann, “future increases in flood risk and erosion risk could be kept to a minimum.”

In the end, the question is financial, Reimann seemed to suggest.

Since adaptation will be especially challenging in countries with a large number of World Heritage Sites such as Italy, Croatia, and Greece, she said, and some of these countries face other concerns, “such as the economic crisis, refugees issues and social conflict,” they will not be able to address the issue on their own.

In these instances, the UNESCO World Heritage Convention might be able to support the affected countries, she said.