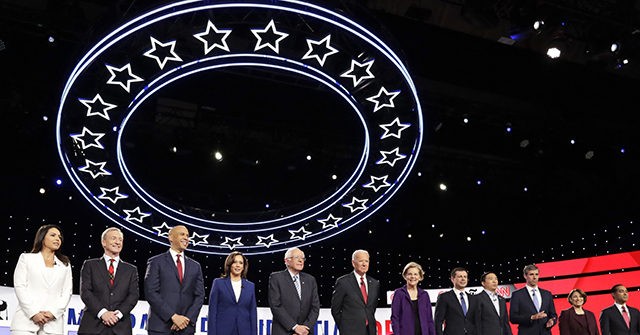 CNN and the New York Times failed to ask a single immigration-related question to 2020 Democrat presidential primary candidates during the fourth Democrat debate.

Despite being the leading issue among all American voters, according to Harvard/Harris polling, CNN anchors and a New York Times reporter ignored the immigration issue that motivated millions of voters in the 2016 presidential election.

Various 2020 Democrats have vowed to implement the most open borders agenda in the history of the country with candidates like Sen. Elizabeth Warren (D-MA) and Sen. Bernie Sanders (I-VT) promising to decriminalize illegal immigration and the majority endorsing a plan to force American taxpayers to provide free health care to all illegal aliens.

The lack of questions on immigration to 2020 Democrats comes as swing voters are increasingly turned off by the candidates’ plans to bring millions of more foreign workers to the U.S.

The latest Wall Street Journal/NBC News poll finds that the 2020 Democrats’ health care for illegal aliens plan is the most unpopular policy position thus far in the race for president, with opposition from 62 percent of all likely voters.

Polling from Harvard/Harris reveals among all U.S. voters, and particularly with swing voters, that presidential candidates campaigning for immigration, illegal and legal, is the most unpopular policy position.