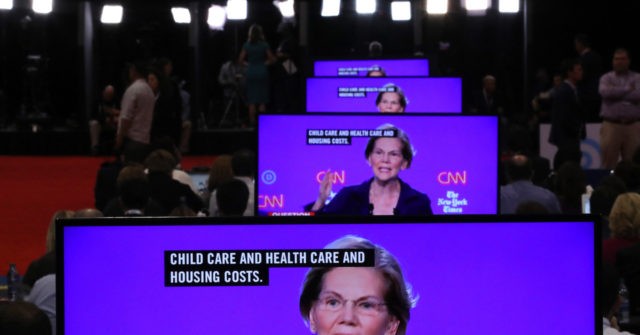 CNN gave Sen. Elizabeth Warren (D-MA) the most speaking time during the Democrat presidential debate on Tuesday, allowing her to speak for a total of 23 minutes, easily outdistancing rival Sen. Joe Biden (D-DE), who spoke for a total of 16 and a half minutes.

The televised debate, which was co-hosted by the New York Times, was dominated by Warren, who has been gaining ground on Biden in recent polls and is regarded by many as the frontrunner for the Democrat nomination.

Sen. Amy Klobuchar (D-MN), Beto O’Rourke, and Sen. Bernie Sanders (I-VT) each spoke for a little more than 13 minutes apiece on Tuesday, according to data reported by CNN.

Mayor Pete Buttigieg of South Bend, Ind., and Sen. Kamala Harris (D-CA) spoke for a total of less than 13 minutes each.

In past Democratic debates, candidates Andrew Yang and Marianne Williamson claimed that their mics appeared to be turned off when they tried to jump into the live discussion.

As much fun as I’ve had laughing at all the understandable hilarious tweets about me today, the mic issue is not funny and yes it did happen. I tried a couple of times to jump in and my mic was not on. Particularly wanted in on the subject of race.

Second, I feel bad for those who tuned in to see and support me that I didn’t get more airtime. Will do better (my mic being off unless called on didn’t help) and glad to have another opportunity in July (and afterwards)!

Rep. Tulsi Gabbard (D-HI) threatened to boycott Tuesday’s debate, saying on Twitter that she is trying to bring attention to the “DNC/corporate media’s effort to rig [the] 2020 primary.”

I am seriously considering boycotting October 15 debate to bring attention to DNC/corporate media’s effort to rig 2020 primary. Not against Bernie this time, but against voters in early states Iowa, New Hampshire, South… –> https://t.co/x5P3GFGbyn pic.twitter.com/UgKCj6DGI0

Gabbard ended up participating in Tuesday’s televised event, but CNN only gave her a little more than eight minutes of air time, just ahead of entrepreneur Tom Steyer, who spoke for a total of seven minutes.

Yang clocked in a total of over nine minutes of speaking time on Tuesday.

When CNN hosted the first Democrat debate in July — which was divided into two nights — Biden emerged with the most speaking time at 21 minutes, followed by Warren with 18 minutes.