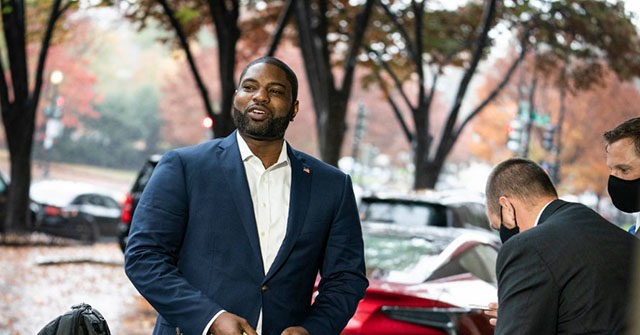 Rep. Byron Donalds (R-FL) was scheduled to appear on Thursday night’s edition of CNN’s Cuomo Primetime, but he was “bumped” and his time slot was given to Rep. Adam Schiff (D-CA).

“It looks like @brikeilarcnn called @ChrisCuomo & told him he should rethink interviewing me tonight,” Donalds wrote in a tweet, referencing his interview from earlier on Thursday with CNN’s Brianna Keilar. “I’ve been BUMPED from tonight’s show, Russian collusion, ‘Trump’s a Russian agent’ @AdamSchiff took my place.”

It looks like @brikeilarcnn called @ChrisCuomo & told him he should rethink interviewing me tonight. I’ve been BUMPED from tonight’s show, Russian collusion, “Trump’s a Russian agent” @AdamSchiff took my place.

I’m not surprised. Someone has to tell Chris I’m better for ratings. https://t.co/eTNj4M8Woj

“I’m not surprised,” Donalds added. “Someone has to tell Chris I’m better for ratings.”

The Twitter account for Cuomo’s show shared the news of Schiff’s appearance, saying the California congressman would join Cuomo on the airwaves “following bombshell New York Times reporting that the Trump DOJ subpoenaed Schiff’s data and the data of his House Intelligence Committee aides in 2017 and 2018.”

On Wednesday, reports surfaced that Donalds had been blocked from joining the Congressional Black Caucus (CBC). Donalds joined CNN’s Keilar to discuss the matter on Thursday and was pressed about his support for former President Donald Trump, his questioning of the 2020 presidential election results, and his support for stricter voting laws.

In response, Donalds argued that “as a black man in America,” he is “allowed” to have his own thoughts.

“Do you think that your defense of a person that said things like that might be incongruent with the mission of the CBC?” Keilar questioned.

“First of all, whatever the president said in the past has nothing to do with this discussion at all. I think it’s important to understand that –” Donalds said before being cut off by Keilar.

“Well, you’ve defended … him,” Keilar said, to which Donalds asked her politely not to cut him off.

As a black man in America, I’m allowed to have my own thoughts on who I choose to support and who I choose not to support. I think that it’s important whether you’re talking about the Congressional Black Caucus or the Florida State Legislative Black Caucus or the National Caucus of State Black Legislators — organizations I have been a part of in the past. My support of President Trump has been consistent, but at the same time, I’ve had the ability to advocate for issues, ideas, proposals and funding that have helped the black community in my state.

Donalds later shared a message on Twitter and touted his upcoming Thursday night interview with Fox News’s Laura Ingraham. “Do you know who won’t cancel a scheduled interview while you’re sitting in the seat ready to air,” Donalds questioned in a tweet. “The @IngrahamAngle!”