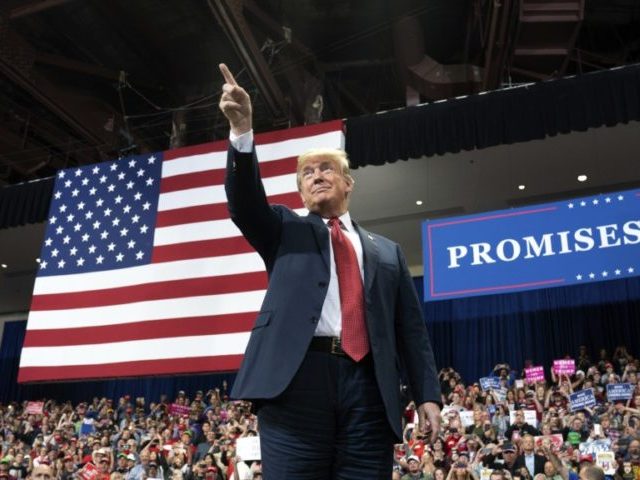 Soaring economic optimism means that it is unlikely the 2018 mid-terms will be a “wave election.”

America is experiencing a record-breaking era of good feelings, economically speaking. Optimism about the economy, measured by Americans who are optimistic about current conditions and the future, hit an all-time high in CNBC’s All-American survey, the financial news network reported Monday.

Fifty-one percent of Americans approve of Trump’s handling of the economy, according to the CNBC survey. This was the second consecutive CNBC quarterly survey showing that Trump’s handling of the economy was viewed positively by the majority of Americans. It further supports the finding Friday from the University of Michigan consumer survey that confidence in the government’s economic policies jumped to the highest level in fifteen years.

Liesman said that CNBC’s pollsters think it is likely that the positive results on the economy likely mean this election will not see a “Blue Wave” of Democrats taking seats from Republicans.

“They’re cautioning that this is not a wave election in the making. They point out that you need lousy numbers on the economy to have a wave election or a lot of pessimism about the economy,” Liesman said. “One of the things we see is that a lot of people who have concerns about the president’s temperament are willing to look through that because of his handling of the economy.

According to Liesman, the CNBC poll shows Democrats with just a six-point advantage on the generic ballot.

“That’s not a lot. They should be higher,” Liesman said. “They’re not saying the Dems will not take the House. But a wave election, they don’t see.”

The driving force behind the record high optimism: improved sentiment across the political spectrum. One-out-five Democrats are optimistic now and for the future, a higher level of positive sentiment than Republicans had under Obama. Sentiment among independents is also higher than when Obama was in office, according to the survey. Republicans are more optimistic than Democrats were under Obama.

Wage expectations also hit an all-time high for the survey, with average expected pay increases hitting 5.1%. The survey has been conducted since 2007, which means it doesn’t include the period before the financial crisis began to take hold. Strong optimism about wages will make it harder for Democrats to claim the Trump economic boom is mostly benefiting the wealthy or investors.

“There is a tangible, consequential event here from the [2016] election,” CNBC senior economic reporter Steve Liesman said on Monday.