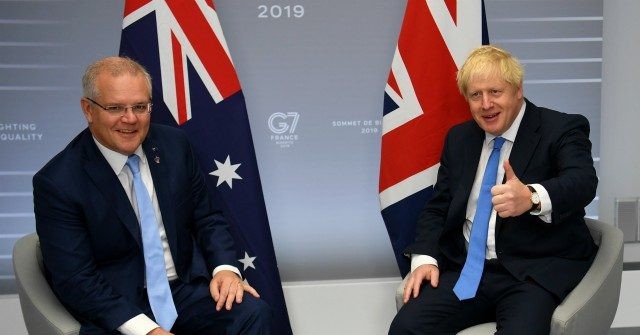 The UK has launched post-Brexit trade negotiations with Australia and New Zealand, with the Australian high commissioner saying that a deal is “top priority” for Canberra, which he expects could be signed “fairly soon”.

International Trade Secretary Liz Truss announced the opening of talks on Wednesday. The UK traded £21 billion worth of goods and services to the two Commonwealth countries last year, and free trade agreements could see the value of exports increased by £1 billion.

“Drinks companies, the automotive industry and professional services firms are among those expected to benefit from removing barriers to trade with Australia and New Zealand,” the Department for International Trade said.

“Trade agreements with Australia and New Zealand will help boost our economic recovery by opening up new markets for businesses, creating jobs and supporting a range of industries across the UK. In the long term, UK workers’ wages could increase by £400m and £200m respectively, while consumers are expected to benefit from a greater choice of goods and lower prices,” the office added.

Both FTAs will include chapters on digital trade to maximise opportunities for businesses to trade digitally. They will also include sections dedicated to small and medium enterprises (SME) to help the bedrock of British industry sell their goods in the Antipodes.

Australian High Commissioner for the UK George Brandis told talkRADIO’s Julia Hartley-Brewer on Wednesday that it is expected a deal between the two Anglosphere nations to be completed in “a matter of months, not years”.

Noting the tremendous “political will” on both sides to get a deal done, he said: “I would hope that we would have this wrapped up in the next six to 12 months.”

The timeframe is good news, and contrasts with Canberra’s trade negotiations with Brussels: two years on, and Australia has yet to sign a deal with the European Union.

Mr Brandis also told Sky News that now is the right time for the UK and his nation to deepen their relationship in order to challenge ascending oppressive regimes, like China.

“At a time when there are tensions in the world that are growing more acute — and which have been dramatised and thrown in very stark relief by the COVID crisis — the benefit, the importance to each other of like-minded, free-trading liberal democracies like Britain and Australia has never been greater,” the high commissioner said.

PM @BorisJohnson on the commencement of free trade agreement talks between the UK and Australia 🇺 pic.twitter.com/WxqaZdqL5q

The opening of trade talks comes as the UK and EU have agreed for a renewed energy to agree on a deal by the autumn, with Prime Minister Boris Johnson saying that one could be signed by July.

Prime Minister Johnson said on Wednesday that he was “absolutely thrilled” to inaugurate the UK-Australia free trade agreement talks.

Highlighting all the products that the UK already imports from Australia, he said he hoped a new deal would mean reduced tariffs on Australian wines and Tim Tam biscuits would translate into lower prices for consumers.

On Australian exports, he remarked: “We export all kinds of things, including — I was amazed to discover — boomerangs, made in the UK and exported to Australia.

“I don’t think they come back, but we send them to Australia.”

Mr Johnson continued: “There is a huge amount that we can do, whether it’s on financial services or across all the sectors of our free trade agreement.

“We share a language. We share a Head of State [Queen Elizabeth II]. We’re united by so much already.

“Let’s get this free trade agreement done. Australia and the UK coming closer together than ever before.”

Out of the EU and into the World: UK Opens Trade Talks with Japan https://t.co/FO2ogTAkIq