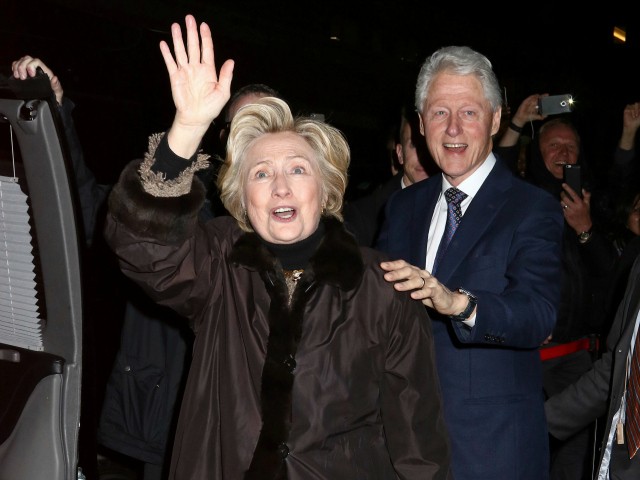 Bredesen sent $33,400 in 2016 to try to elect Hillary Clinton as president. In March 2016, the former Tennessee governor suggested to Fox Business viewers that “a lot of dedicated Democrats” in Tennessee needed to “roll up their sleeves and go out and get to work” to elect Clinton in a tough state.

Sen. Heidi Heitkamp has received praise from former President Bill Clinton. In an audio clip posted to Heitkamp’s YouTube page in October 2012, Clinton called Heitkamp his “friend” he has known for years.

Morrisey released a campaign ad Wednesday showing him telling miners that Manchin and Democrats have been trying to kill the coal industry. He says Manchin abandoned them, and a message flashes across the screen stating, “Joe Manchin Supported Obama and Clinton Who Promised to Kill Coal Jobs.” The message cites CBS and CNN. Morrisey then pledges to work with President Donald Trump to fight for coal and “win.”

Republican Mike Braun of Indiana hit Democrat opponent Sen. Joe Donnelly in late August for Donnelly’s praise of Hillary Clinton as an “incredibly great leader.” Donnelly was stumping for Clinton’s 2016 presidential campaign when he made the statement.

Mrs. Clinton will be the special guest at a New Jersey fundraiser for Democrat Sen. Bob Menendez next month. The North Jersey Record quoted Menendez spokesman Steven Sandberg, who in an email called Menendez and Clinton “long friends and former colleagues,” adding, “Hillary has been with Bob Menendez in the trenches as they fought for the issues New Jerseyans care about like women’s rights, good-paying jobs, access to health care and making college more affordable.” Menendez served as co-chair of Clinton’s 2008 campaign for president. He faces a challenge from Republican Bob Hugin, who has repeatedly alerted voters to the Senate Ethics Committee’s reprimand of Menendez for the use of his office to benefit a top campaign contributor.

Hillary Clinton hit her lowest ever approval rating in December 2017 at 36 percent, according to CNN, which cited a Gallup report. At the same time, she reached her highest unfavorable rating at 61 percent. The Washington Examiner reported in December 2017 that former President Bill Clinton hit his lowest favorability rating since 2001 and correlated that low to a post-Harvey Weinstein #MeToo world.

A June 2018 Rassmussen nationwide survey of voters found 53 percent identified the former president as a sexual predator rather than a victim. Just 24 percent identified him as a victim, while another 24 percent choose neither option. The poll followed within a week of Bill Clinton’s claim during a television interview that he was the victim of a sexual scandal.