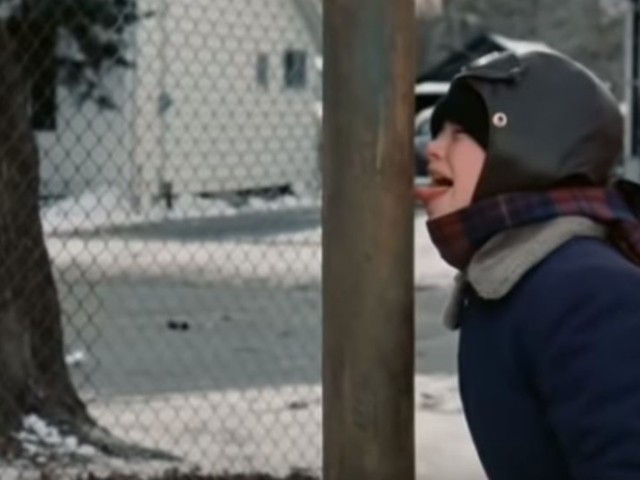 The Twitter account for the Cleveland Indians promised to “lick the foul pole,” if they get one million retweets.

In offering the dare, the Tribe’s Twitter account borrowed from a scene straight out of the classic Cleveland movie A Christmas Story. Where Ralphie’s classmate Flick accepts a challenge to stick his tongue on a cold, metal flagpole with predictable results, Fox 8 reported.

No, we’re not warm yet.
Yes, we will do it. pic.twitter.com/aiykd0UpQV

While the Indians’ home town isn’t as super chilled as the Chicago Cubs’ (at 5 PM it was minus one in Cleveland while it was minus ten in Cubby land), it is certainly not a safe idea to put one’s tongue on a steel pole in the frigid out-of-doors.

The tweet did not exactly say who the “we” is who might be doing the pole licking, but the Cleveland Cavaliers quickly jumped into the game with a reply saying, “I triple dog dare you.”

The Cleveland Browns also piled on:

Some other Major League teams also tried to horn their way into the game:

How many RTs for a snow angel on the field? Asking for a friend.

It’s not worth it! Trust us… pic.twitter.com/4qKQmloeSS

Finally, Cleveland’s Department of Water had a tip just in case someone tries the pole lick trick:

In case this works out (?) for you, a warm cup of tap water will unstick a tongue from a pole