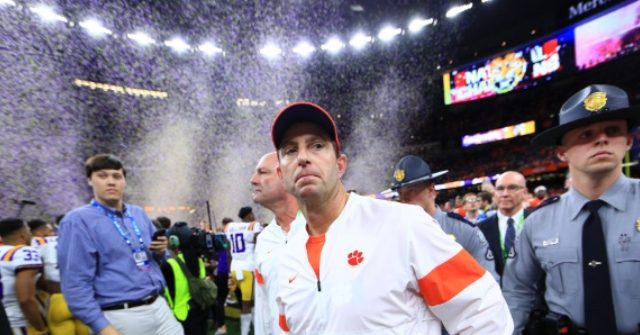 Photos of the shirt began appearing online of Saturday. The post was later deleted, but not before many took screenshots of the image:

People are trying to ruin Clemson coach Dabo Swinney because he wore a “Football Matters” shirt.

Here’s a quick reality check. Football does matter. It’s about unity, teamwork and the sport has helped lift countless people out of poverty.

Now more than ever, we need football. pic.twitter.com/dxMGx5tEn5

In the wake of a week of rioters destroying many of America’s cities in the aftermath of the killing of George Floyd, some social media users, sports fans, and journalists have taken exception to the coach’s t-shirt. The critics assume that the slogan is a slight, or intended to belittle the Black Lives Matter movement. The coach took much criticism throughout the day, Saturday:

“if [dabo swinney] can’t even deal with [race] on his team, if his only answer for black pain is to forgive, he’s doing damage to his players and a disservice to himself.”
i did a parting shot for @otlonespn. pic.twitter.com/010A1hpkUS

Second: Monday night column on Dabo Swinney, a great coach who is not rising to the occasion. https://t.co/VsFIQqJJI2

If y’all still confused, as bad as everyone loves football…Dabo(guy on right) black players expected him to be the white guy on the left not the guy on right!! They scared to speak up I’m not!!!! TIGHTEN UP DABO. These black players you mocking made you a lot of M’s
# getWILDER pic.twitter.com/Xd8hALfPOQ

Dabo is failing his black players on police brutality and racism💯…
Facts !

Clemson quarterback Trevor Lawrence, though, stuck up for the coach and told followers that Swinney has been wearing the shirt “for months,” long before the death of George Floyd and the resurgence of the Black Lives Matter movement.

“Coach Swinney’s shirt, in any way, is not mocking the Black Lives Matter movement. He has been wearing the shirt for months in meetings,” Lawrence tweeted.

Coach Swinney’s shirt, in any way, is not mocking the Black Lives Matter movement. He has been wearing the shirt for months in meetings.