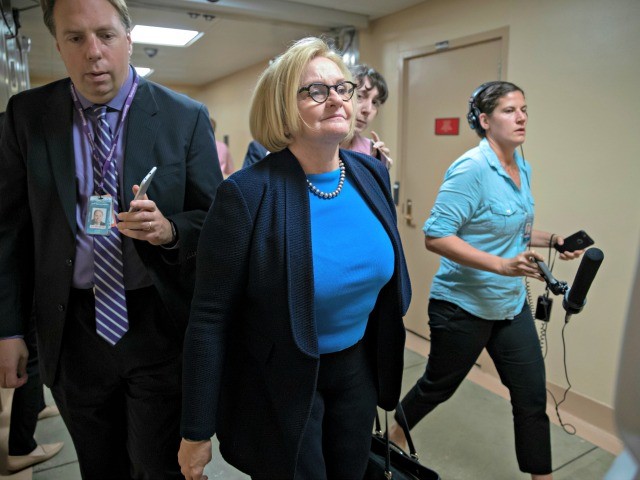 Sen. Claire McCaskill announced Wednesday she will vote against confirming Brett Kavanaugh, the Supreme Court nominee, but that the allegations against him – which she called “troubling” – are not a factor in her decision.

Claire released the following statement on the nomination of Judge Brett Kavanaugh to the Supreme Court: pic.twitter.com/QGkEYegig9

“I have been thorough in examining Judge Kavanaugh’s record,” McCaskill said in a statement released by her office.

And while the recent allegations against him are troubling and deserve a thorough and fair examination by the Senate Judiciary Committee, my decision is not based on those allegations but rather on his positions on several key issues, most importantly the avalanche of dark, anonymous money that is crushing our democracy.

McCaskill said that Kavanaugh “has revealed his bias against limits on campaign donations which places him completely out of the mainstream of this nation.”

She supported that statement by citing an email sent by Kavanaugh in March 2002 to formerAssociate White House Counsel Helgard C. Walker. In the email, Kavanaugh wrote, “And I have heard very few people say that limits on contributions to candidates are unconstitutional although I for one tend to think those limits have some constitutional problems.”

“Going even further, Judge Kavanaugh will give free reign to anonymous donors and foreign governments through their citizens to spend money to interfere and influence our elections with so-called ‘issue ads,’” McCaskill continued. “These ‘issue ads’ are now flooding the airways in this nation to directly influence election outcomes, drowning the concept of individuals having the strongest voice in our democracy.”

The Missouri Democrat is facing Republican Josh Hawley, Missouri attorney general, in a competitive race in November, and has faced significant pressure for weeks regarding her vote on the Kavanaugh confirmation, especially due to the fact that she represents a state won by Donald Trump by nearly 20 percentage points in 2016.

Regarding McCaskill’s statement, Hawley said, “Nobody is surprised. Claire McCaskill is now 0 for 6 on Supreme Court nominees since she started running for the Senate 12 long years ago.”

“She has sided with Chuck Schumer every single time – for liberals and against Missouri,” he added. “Senator McCaskill has forgotten where she’s from and become just another Washington liberal.”