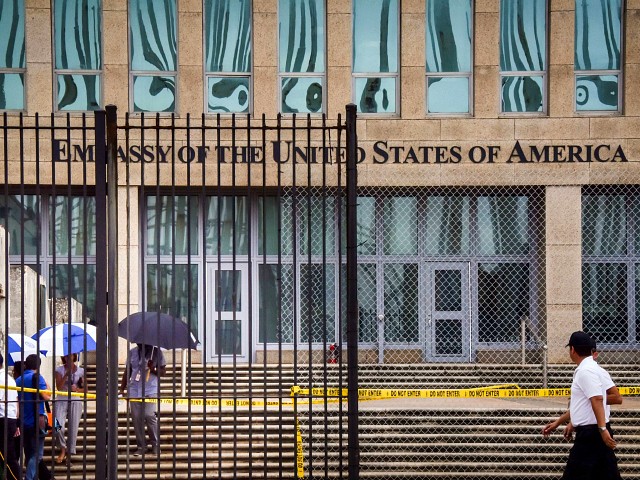 The Washington Post published an explanation piece on Monday attempting to clarify the ongoing saga of “Havana syndrome,” a series of medical ailments the U.S. State Department has branded “attacks” that have affected U.S. diplomats and staff in Cuba.

The Post, citing no significant evidence or defining whom they are referring to, concluded that “most people” do not believe that the communist Castro regime — which has killed U.S. citizens with impunity and called the illnesses “science fiction” — could have orchestrated the attacks.

Listing China, where doctors have documented the only similar case of brain damage in a diplomat, and Russia, which has played no known role in the ongoing saga so far, as prime suspects, the Post goes on to suggest: “One government most people think is innocent: Cuba.”

“Washington and Ottawa have found no evidence that the Cuban government is involved. Havana has vigorously denied that it has had anything to do with what’s going on and has worked with international teams to get to the bottom of it,” the Post declares.

The Post does not specify that the “work” Havana has done to “get to the bottom” of the incidents has been a mostly independent investigation that concluded — despite scientific evidence disproving the conclusion — that the individuals suffering brain damage had merely confused the sounds of Cuban insects with sonic weapons in their paranoia against the regime. Cuba still does not acknowledge that the diplomats and their relatives suffered real physical damage to their brains.

The Post also omits testimony from former Cuban political prisoners who said they experienced a rudimentary form of torture while behind bars that resembled the sounds and symptoms described as having occurred in 2016 and 2017 in Havana.

The piece suggests another potential set of culprits — “Cuban hard-liners loyal to Fidel Castro” of the attacks, claiming that, if this group is the culprit, they “are probably acting in conjunction with another hostile government.”

The publication does not provide any background information detailing what such a group could look like or any evidence that such dissidence exists within the ranks of the tightly controlled military regime in Havana. It also fails to explain why any Cuban regime oligarch would be loyal to the late Fidel Castro and not to brother Raúl, who personally did much of the killing and torturing necessary to keep Fidel in power in the 1960s. There is no evidence that this group of individuals exists.

Raúl Castro currently leads the Cuban military and the Communist Party, making him the island’s supreme leader. He recently appointed a deputy, Miguel Díaz-Canel, to wield the relatively powerless title of “president.” Díaz-Canel has repeatedly asserted his loyalty to Castro and rejected claims in international media that his new title indicated anyone other than Castro was ruling Cuba.

American medical experts have confirmed 26 cases of U.S. diplomats and family stationed in Cuba having suffered brain trauma akin to a concussion. An American diplomat in Guangzhou, China, was diagnosed with the same issue after hearing similarly abrasive high-pitched sounds in her apartment.

This weekend, the Canadian government sent a delegation to Cuba to investigate the situation after 13 Canadian diplomats also suffered the same symptoms. Many of those, through anonymous remarks to the media, lamented last month that they felt their government had abandoned them and attempted to keep their story from the public.

Unlike the United States, the government of Prime Minister Justin Trudeau retains friendly relations with the Castro regime, leading many to question why Cuba would target Canadian diplomats and to believe that the weapons used do not have the accuracy necessary to attack individuals and have, instead, injured Canadians who happen to work in close proximity to the Americans.