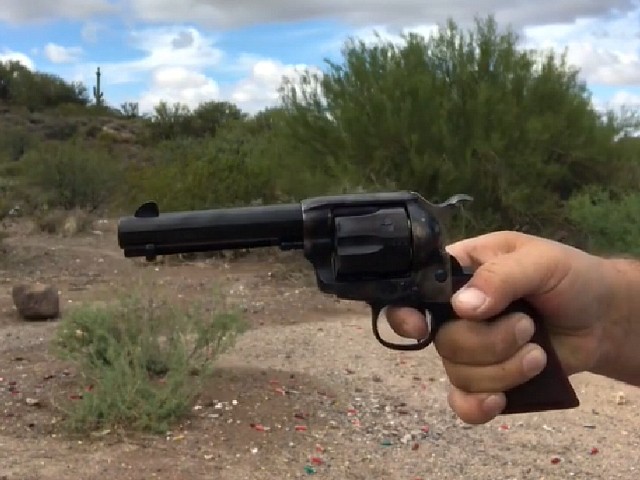 The Cimarron Evil Roy single-action revolver in .357 Magnum is precise and accurate, as well as a beautiful gun.

This particular handgun’ style is a throwback to the iconic single-actions of frontier days gone by, yet the gun itself is very much a part of the present and a most attractive choice for single action shooters who travel to various shoots on weekends throughout the United States.

When Breitbart News first got an Evil Roy to review, we were struck by the precision of the action. We had been told by a single shooter in West Texas that we were going to love it, but we did not know just how right he was.

Listen to the action:

And the trigger is fantastic. Once cocked, the trigger is short and smooth, and it, combined with the 4.75-inch barrel, delivers incredible accuracy.

We handed it to a friend and accomplished shooter at the range, and soon his goal was not to hit the target but to try to put the bullet in the same hole on the target each time.

The Evil Roy 357 Magnum 4.75-inch barrel is uncommonly accurate. And it should be noted that we used a variety of ammunition in shooting the firearm, from brand new Remington .38 Special to Winchester white box to some lead-nose ammo made by Peters in 1966-68. Our only rule was no +P, as specified in the gun’s owner’s manual.

Whether you have yet to take the time to get acquainted with single actions or even if you are a seasoned veteran, this gun, thus far, is flawless.

Moreover, it is beautiful. A work of art that jumped right out of the Old West and landed in the 21st century.

We are still reviewing the Evil Roy and preparing to do more regimented shooting at a steel range, but for now, we can only say this gun goes with us every time we go to shoot and it has frequently been used for everyday open carry on excursions in western states.

We carry the Evil Roy in a Texas Jack holster: