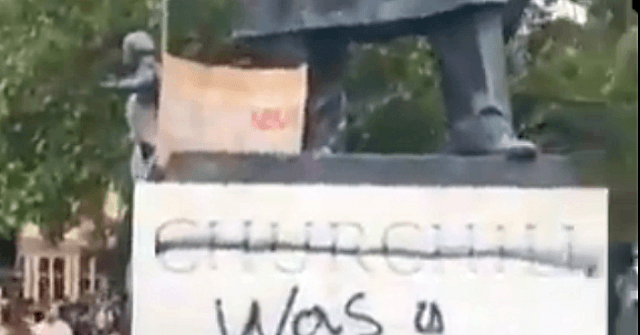 The statue of wartime prime minister Sir Winston Churchill in Parliament Square has been vandalised again, with fresh graffiti branding him a “racist”.

Footage shot earlier in the day shows a small band of patriots ringing the statue to protect it, surrounded by a small but growing mob baying “Churchill was a racist!” at them while police officers milled around nearby.

They must have been forced to abandon their efforts at some point, however, with video published near the time of this article’s publication showing the statue festooned with protest placards, the name ‘CHURCHILL’ scored out in black spray-paint, and the words ‘Was a Racist’ scrawled underneath it.

Sunday’s vandalisation is somewhat ironic, as on Saturday — when the Churchill statue was also vandalised, along with the statue of Abraham Lincoln and the Cenotaph — far-leftists were using the D-Day anniversary as an opportunity to claim Churchill and the Allied forces who stormed the shores of Normandy as “the original antifa”.

Vandalising Churchill monuments in London is unlikely to be the way your political cause makes progress in #Britain. pic.twitter.com/2Cl78THtlX

“These revolting people have Churchill to thank for being in a free country able to protest,” remarked Brexit Party chairman and entrepreneur Richard Tice on the anti-Churchill demonstrators.

“Where are [Prime Minister Boris Johnson, Home Secretary Priti Patel, and Mayor Sadiq Khan] in condemning these thugs,” he demanded.

Prime Minister Johnson has yet to make any remark on the violence at the ongoing Black Lives Matter protests, which saw a number of police officers injured outside his official Downing Street residence off Whitehall on Saturday, despite the fact that they fly in the face of the anti-coronavirus measures he has imposed on the wider country for months now.

“Do we have a leader?” asked Brexit Party leader Nigel Farage in response to the silence.

“[Boris Johnson] is supposed to be a Churchill fan, but he says and does nothing,” he observed.

These revolting people have Churchill to thank for being in a free country able to protest. Where are @BorisJohnson @pritipatel and @SadiqKhan in condemning these thugs. pic.twitter.com/6GZeix0qd5