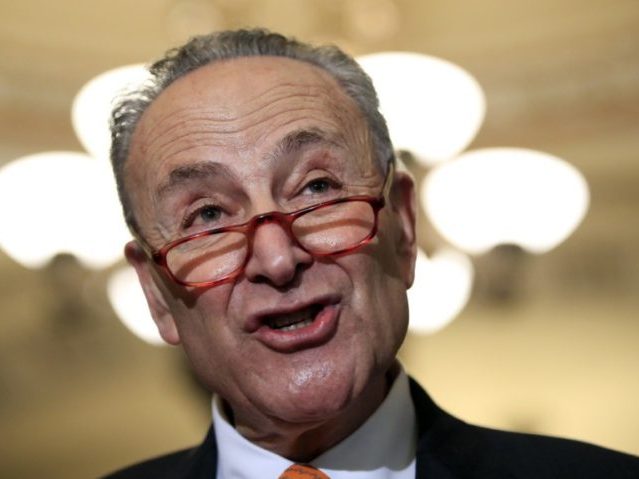 After being filmed hanging out with McFarland at the disgraced Fyre Festival organizer’s New York penthouse during McFarland’s legal battle against various charges of fraud, Schumer’s press secretary Angelo Roefaro admitted to the friendship.

“We were friends,” admitted Roefaro in an interview with the New York Post. “I met him at a networking event and we got along.”

“That night, as a result of a TV show or movie being filmed in his apartment, he had a very nice complimentary penthouse hotel room near my own apartment and invited me over to check it out,” Roefaro claimed. “I had no idea they were filming a movie and only knew him. I was completely surprised.”

Why the hell are you, Chuck Schumer’s press secretary, in the Fyre Festival documentary, meeting with the Fyre Festival guy while he’s out on bail and committing even more crimes @AngeloRoefaro pic.twitter.com/K01qYsn6Pi

Roefaro appeared in Netflix’s recent documentary on the disastrous 2017 Fyre Festival, where he was secretly filmed hanging out with McFarland after the scandal.

In the documentary, the cameraman declares, “There’s a guy named Angelo and I don’t know if it was Billy’s PR guy, but I know that this guy was very connected.”

In October, McFarland was sentenced to six years in prison on multiple counts of fraud, both related to the Fyre Festival, and another scheme he was conducting while on bail.

U.S. District Court Judge Naomi Buchwald described McFarland as a “serial fraudster,” and claimed, “his fraud, like a circle, has no ending.”

Fyre Festival, which took place in April 2017, was supposed to be a luxury music festival and charged attendees thousands of dollars for tickets and extras.

However, when attendees turned up to the festival, they discovered “a lack of food, violent locals, appalling accommodation and feral dogs roaming the grounds.”

Attendees at the time reported “half-built tents, their luggage being thrown out of the back of a truck, muggers and thieves laying in wait to steal wallets from trust fund kids, unhelpful staff, and ‘gourmet cuisine’ that turned out to be nothing but ham and cheese sandwiches.”

The dinner that @fyrefestival promised us was catered by Steven Starr is literally bread, cheese, and salad with dressing. #fyrefestival pic.twitter.com/I8d0UlSNbd

The “gourmet cuisine” this weekend was included in the ticket cost. We are being fed salads and ham and cheese sandwiches out of this tent pic.twitter.com/MRv7U0RiyM

These are the secure lockers at Fyre Fest. They forgot to tell us we needed locks. #fyrefestival #fyrefest pic.twitter.com/Tqyjqbg2Gy

The attendees, who discovered their luxury accommodation was nothing more than a row of unfinished disaster relief tents which had been soaked by the rain, were also unable to quickly escape, with a lack of transportation.

Due to mass panic, the attendees were then locked in a room with no food or water.

We have been locked indoors with no air NO FOOD and NO water #fyrefestival #fyrefest fyrefraud pic.twitter.com/wg5pZmSvnx