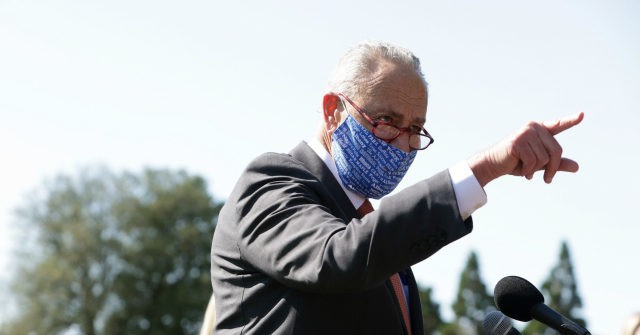 “I wish President Trump and First Lady Melania Trump and White House staff members who are infected a speedy recovery. I join the nation in praying for the First Family’s health and safety,” Schumer said before criticizing the administration for, he suggested, ignoring “science.”

The New York lawmaker said the president’s diagnosis serves as a reminder of “why the whole country, including Senators and staff, must follow the science and follow the protocols laid out by the CDC and public health officials.”

“When you ignore the science, you don’t wear a mask, and you don’t follow social distancing guidelines, it puts you and everyone around you at risk,” he said. “Following science is a must.”

Schumer also used his statement to call for the creation of a rigorous testing and contact tracing program “for Senators, staff, and all who work in the Capitol complex.”

“It is imperative that all results be made public in order to contain a possible outbreak and so we can determine the need for Senators and staff to quarantine or self-isolate,” he continued:

The prominent Trump critic also called on the White House to “immediately conduct a contact tracing regime that follows CDC guidelines, as well as thorough testing and isolation for those who were exposed to infection risk”:

This must include strict adherence to those guidelines for all of the White House staff members that the President, First Lady, and the aide came into contact with; and all of the people those individuals came into contact with whom experts deem at risk of exposure, and so forth. That includes Judge Amy Coney Barrett and anyone she was in contact with.  It must also include people in the Senate with whom those individuals came into contact with, and their contacts.  Though they have not done so in the past, the administration must now follow the science and all recommended health protocols in order to not put additional people at risk. And they must be completely transparent.

Both Trump and the first lady are experiencing “mild symptoms” of the virus but remain in good spirits, according to reports.

It remains unclear from the statement if Schumer believes Barrett, who recently met with both the president and Sen. Mike Lee (R-UT), who also tested positive for the virus, should remain in isolation despite testing negative.

Talked to Senator Lee earlier today and wished him a speedy recovery.

Look forward to welcoming him back to the @senjudiciary to proceed with the nomination of Judge Amy Coney Barret on October 12. https://t.co/OVm0OQbnQF